The Worst-Ever Booklet for a Tarot de Marseilles 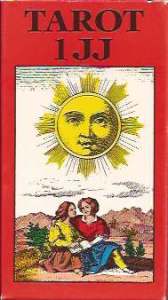 The other day, I was looking at a 19th century Tarot de Marseilles, the 1JJ, that was published in Switzerland with an accompanying booklet written in French. The booklet has a Rider Waite Smith image on the cover! What were they thinking?

U.S. Games Systems, Inc, which holds the copyright for the Rider Waite Smith deck, has some kind of link with the playing card publisher AGMuller. AGM published the 1JJ deck and is a European distributor of U.S. Games decks. I think someone at U.S. Games told AGMuller they needed to include a “Little White Book” (LWB) with their deck for people who planned to use it for divination, then suggested they just translate the Rider Waite Smith booklet.

The translator obviously didn’t bother to look at the 1JJ deck. As in all TdM’s, the Fool and Magician cards are labeled Le Mat and Le Bateleur. The LWB lists the first major arcana card as Le Bateleur, but gives divinatory meanings like folly, lack of discipline and delirium, that obviously refer to the Fool/Le Mat. Then, the divinatory meanings that belong to Le Bateleur are attributed to a card called Le Mage, a term which does not exist in any Tarot de Marseilles deck, but is a direct translation of The Magician from the RWS booklet.

Here’s what the Rider Waite Smith booklet says about the Eight of Wands: “a flight of wands through an open country. Activity in undertakings, swiftness, an express messenger, great haste.” You can see that in the card.

Here’s what the 1JJ booklet says about the same card: “Diligent activity, swiftness, decisions made rapidly.” Sorry, but I just don’t see anything swift or rapid in that heavy mass of crossed rods that are locked together in the center.

Bottom line: You can’t count on the booklet that comes with your deck to tell you anything relevant about your cards. In fact, it may very well lead you astray.

Does anyone have another candidate for worst LWB?