Echoes of the Visconti-Sforza Deck at the Getty 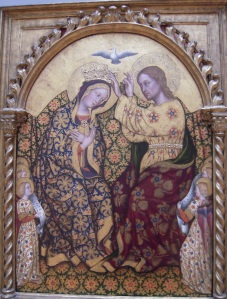 Whenever I go to a museum, I make a point of searching the medieval exhibits for International Gothic art that resonates with the Visconti-Sforza deck. A recent chilly (by Los Angeles standards) Sunday at the Getty Center yielded three finds in one room.

The artist Gentile da Fabriano (1370-1427), the epitome of Italian International Gothic, flourished at the time Tarot was invented and just before Italian aristocracy began commissioning their elaborate hand painted decks. Aristocrats wanted to see an idealized version of themselves and their elegant world reflected in their art. Rich colors, glittering surfaces and intricate patterns were hallmarks of the International Gothic period, when artists reproduced in paint the feel of velvet brocade and the look of clothing intricately embroidered with gold thread.

In Da Fabriano’s Coronation of the Virgin (1420) both Christ and the Virgin Mary wear heavy brocade robes in the early fifteenth century style. Compare the patterns of their robes with the Queen of Coins from the Visconti Sforza deck of 1450. 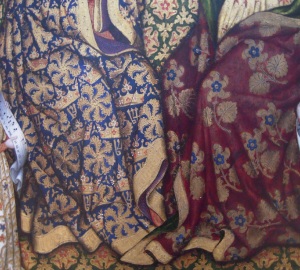 The description of Da Fabriano’s painting from the Getty Museum’s website could easily apply to the Visconti-Sforza tarot deck:

Both the painting and the Visconti-Sforza deck were rendered with gold leaf and paints made of powdered lapis lazuli, malachite and other precious minerals. Neither the painting nor the deck was sequestered in a safe corner and seen by only the privileged few. In the fifteenth century, as well as succeeding centuries, expensive objects were flaunted in public. The Coronation painting was mounted on a standard and paraded through the streets on religious occasions. The Visconti-Sforza deck was passed around, handled, and possibly used for card games. Most cards are moderately to severely damaged, so one can imagine the Duke of Milan laughing dismissively to show the expense meant nothing to him as the gold leaf peeled off a card, or the lapis paint crumbled onto the reception room floor. 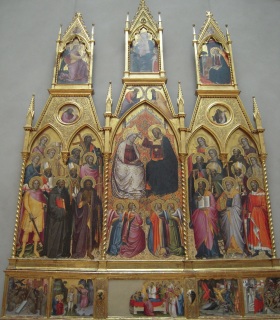 This altarpiece by Bartolomeo Vivarini (1432-1499) doesn’t have Tarot-related imagery but is very much part of early Tarot’s milieu. It was created in 1490 for a church near Bergamo at a time when the demand for hand painted tarot decks had just peaked; so it shows the visual environment and the artistic taste of the people who commissioned and used those decks.

Vivarini’s altar glows with luscious colors – apricot, lavender, apple green, and lavish amounts of gold – just like the Duke of Milan’s iconic Visconti-Sforza deck. Click on the photo for a closeup view of the colors.

In the 1440s, when Milan was enjoying even more political turmoil than was usual in those turbulent times, the warlord of Bergamo, Bartolomeo Colleoni, supported Francesco Sforza. A century or two later, the Colleoni family somehow came into possession of the hand painted deck created by Bonifacio Bembo for Francesco Sforza in 1450, now known as the Pierpont Morgan Bergamo deck, and the most reproduced 15th century deck today.

The next work of art is not medieval, but I thought it would make a great Queen of Coins. My scrawled notes say this is the Allegory of Liberty by Francesco Ubertini, painted between 1530 and 1540. But when I checked the Getty’s database of paintings, they only have one Ubertini, and it’s not this. They don’t have anything called Allegory of Liberty and a Google search didn’t turn up a match. It looks more like an allegory of Plenty with the chubby child and the open bag of coins at bottom left. Are there any art majors out there who can identify this for me? 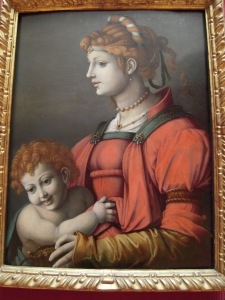