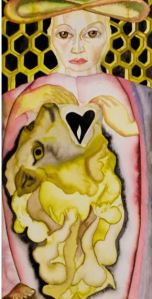 You know Tarot has made it in the mainstream art world when a contemporary deck is given its own exhibit at the venerable Uffizi Museum.

Art News magazine just gave the deck a one-page spread in its March 2012 issue to announce the book, Francesco Clemente: The Tarots, published by Hirmer and available on Amazon for $33.00.

Clemente is an Italian artist based in New York City who studied tarot history and learned to read the cards before creating his deck. He’s quoted in the New Yorker as saying “I never imagined how similar the activities of reading the tarots and painting a picture are. In both cases, there is the effort to be completely present, and at the same time, to remove completely oneself from the picture.”

The original paintings are 19 x 10 inches each and rendered in several media: water color, gouache, ink, color pencil. All the major arcana and court cards are portraits of his New York artist friends: Jasper Johns is the Pope, Scarlett Johansson the Queen of Swords, and Fran Lebowitz is Justice. At the top of this article see Diane von Furstenberg as Strength. Clemente says the deck is his portrait of New York and his way of capturing its aura. He hopes to produce an actual deck in the near future.

On his website, FrancescoClemente.net, you can see a large selection of his surrealist-influenced art containing many unintentional echoes of tarot imagery. There’s also a portrait gallery of cultural luminaries from Beat poets to opera singers.

This online review from the New Yorker has a slide show of his deck.