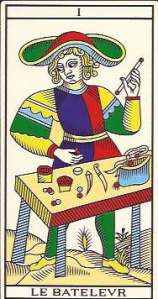 A Tarot de Marseilles revival is in the air. After more than 350 years of continuous use for divination and game playing, the TdM is being rejuvenated with new editions that remain faithful to the 17th century prototypes. A handful of devoted scholars and artists from around the globe are sprucing up the standard Covers-based TdM with fresh colors and crisp lines, and issuing beautifully crafted limited editions.

The first stop on our tour of new productions is Japan and the Institute of Study on Initiation and Symbolism (ISIS).  Examples of founder Tadahiro Onuma’s deck are scattered throughout his class descriptions. There’s a link on the Home page to a shopping cart for purchasing either a majors only or a 78-card deck.

Next, we’ll go half way around the globe to Israel where Yoav Ben-Dov has revitalized the 1760 Convers deck with a faithful-to-the-original update known as the CBD TdM.

Naturellement, France, the home of the TdM, offers the largest selection of decks.

The majors-only Millenium Tarot was created by Wilfried Houdouin as the quintessential TdM after he spent years carefully analyzing 18th-century decks in Europe’s museums. He’s written a gorgeously illustrated book to accompany the deck, Le Code Sacre du Tarot, that discusses tarot in light of sacred geometry and number and color symbolism. I’ve heard an English version is in the works. He shares a gallery of historic decks with the next website.

The only deck listed here that isn’t a modern re-creation is a photo reproduction of the Pierre Madenie deck by Yves Renaud. This 1709 deck published in Dijon and now in the Swiss National Museum of Zurich is a direct ancestor of the 1760 Convers TdM. Renaud plans to issue more photo facsimiles of early 17th cent decks in coming years. The website gallery has scans and historical background of several rare museum decks that most of us will never have the opportunity to see in person.

Let’s not forget the Noblet and Dodal decks lovingly restored several years ago by the late Jean-Claude Flornoy. These decks are direct ancestors of the Convers TdM and a bridge between whatever went before and the standard TdM we use today.

Philippe Camoin, a direct descendant of Convers, has done a couple of re-creations of his ancestor’s TdM. The easiest to obtain is the version he did with Alexandre Jodorowsky in 1997.

All of these decks are limited editions that can be purchased directly from the creator. Many of the deck creators participate in the “Marseilles and Other Early Decks” forum at Aeclectic’s Tarotforum where you can read the reactions of deck owners. As far as I know, everyone is very pleased with the beauty and quality of all these decks.

I hope you’ll browse these websites and maybe even purchase a little Tarot de Marseilles magic for yourself.