The Way of Tarot by Alejandro Jodorowsky and Marianne Costa

This is one of the most significant books in English on the Tarot de Marseilles. Jodorowsky is a Chilean surrealist filmmaker, therapist and tarot reader based in Paris who uses the Tarot de Marseilles exclusively. His background and tarot experience couldn’t be more different from mine, but I feel he’s a kindred spirit. Jodorowsky’s approach to tarot, which I heartily endorse, rests on the following principles:

The book starts by teaching us to see the deck as an organic whole and to observe how each card relates to the others, rather than studying the cards in isolation. Jodorowsky organizes the deck into a mandala with six sets of ten cards each: ace through ten of the four suits, and the trumps divided into sets of ace through ten and eleven through twenty. (The Fool and the World begin and end the series, and the court cards are somewhat awkwardly wedged into this system.) Jodorowsky’s mandala is very rational and satisfying to contemplate. He admits it’s only one of many possibilities, and he’s refreshingly modest in not claiming to have discovered the one true key to tarot.

[NOTE: His card descriptions pertain to the Tarot de Marseilles he created with Philippe Camoin which contains many controversial details you won’t find in other TdMs. If you are using another deck and don’t see something he mentions, don’t worry about it.]

Each component of the deck is discussed from several viewpoints, like holding a crystal up to a flame and turning it to see the beauty of each facet. The trump cards get five different treatments: 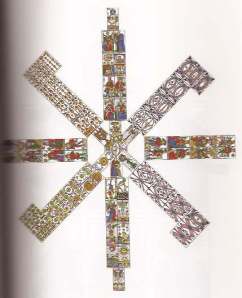 Each pip card is discussed twice. The numerical sequence in each suit tells a story of progressive development; then the four cards that share a number are discussed as a group. The court cards are allowed to speak for themselves in the first person; then they are each given a brief character analysis with divinatory meanings.

I counted at least forty spreads and techniques in the 90-page section on reading tarot. Each spread is illustrated with diagrams, photos and sample readings. The student progresses from one-card readings to a 22-card spread, although most of the spreads are for one to three cards. Jodorowsky also presents creative techniques like using a card as an ally, doing a reading for a trump card to better understand it, and rearranging cards within a spread. True to his European background, Jodorowsky uses only trumps in his readings.