Reading a Trump-Suit Combo with the Tarot de Marseilles 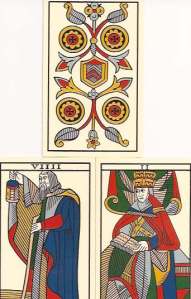 My favorite card-of-the-day draw involves shuffling the trumps and suit cards separately, then pulling a card at random from each stack. I like to flip the two cards over simultaneously so they hit my retina at the same time, setting up resonance between them.

Suit cards describe the details and address specifics. The trumps are like a color filter or a pinch of herbs – they bring out certain qualities of the suit card without altering its core meaning. Here’s an example from my tarot journal of several entries for one suit card in combination with different trumps.

The Four of Coins for me is about enclosure, safety, consolidation and stability. The downside is being stuck, stagnant, rigid and reluctant to change.

Several years ago, I pulled the Four of Coins along with the Hermit on a day when my aching joints and muscles made me feel one hundred years old. I was trapped in a soul-deadening job where I sat at a computer all day dealing with repetitive stress injuries. The Hermit as Kronos can be a stiff, inflexible old person, so he emphasized the Coins’ feeling of physical rigidity.

A few years after this, when my life circumstances had changed considerably, I got the Four of Coins as my card of the day along with the Papesse. This day was spent pleasantly at home reading and writing in my journal. The Papesse nudged the Coins toward being a safe haven. A few months later, the Four of Coins paired up with the Empress when I spent the day organizing my books and papers. I see the Empress as a practical manager, so on this day she helped me get things in order.

The last time I got the Four of Coins as my card of the day, it was paired with the Hanged Man. The two people closest to me had just died within a few weeks of each other, and I felt suspended in a block of ice. The Hanged Man reinforced the stillness at the center of the enclosure.

On all of these days I had a Four of Coins experience that was flavored by a particular trump card.

You can use this technique as a two-card spread for a quickie reading on a specific question. When I’m using this as my daily draw, I sometimes ask “what do I need to focus on today?” Or “what do I need to be aware of as I go about my day?”

Click here for instructions on setting up a tarot journal to keep track of your card combinations.

The cards seen above are from the Jean Noblet Tarot, first published in Paris in 1650. It’s one of the few extant examples of a TdM I style deck, with some unique details that set it apart from the standard Tarot de Marseilles. This deck has been beautifully restored by the late Jean-Claude Flornoy. It can be seen and purchased at http://www.letarot.com