Marseille Tarot: Towards the Art of Reading by Camelia Elias 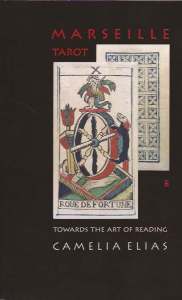 This exciting book by Camelia Elias is a new addition to our small supply of Tarot de Marseille books in English.

We hit the ground running on the first page with an actual reading done in a café. This sets the tone for the book, where every card, and every teaching, is accompanied by a three-card spread illustrated in color.

The essence of Elias’s technique is to tell a concise story with three cards, staying close to the reality of the images. When she amplifies her card meanings with another system, she goes to folk traditions in cartomancy, which she calls the “cunning folk” method.

The heart of the book is a discussion of each trump card. Elias stays with the surface reality of each image and does not indulge in esoteric correspondences or historical speculation. Lists of keywords follow a brief discussion of each card. Health indicators derived from traditional cartomancy show that she doesn’t shy away from topics that many card readers avoid. I particularly enjoyed the “public life” keywords, where she combines two trump cards to describe occupations. Some of my favorites: a professional gambler as the Magician and Wheel of Fortune; or the Hanged Man and Temperance as a yoga instructor.

This book is a special treat for historical deck aficionados, as it’s illustrated with a late 18th-century deck printed in Turin by Carolus Zoya. The deck is in a private collection and can’t be seen anywhere else.

Reading this book was like sitting down with a wise and experienced older sister who shares her lifetime’s experience reading the cards. Packed with practical advice, the book is a load of dynamite disguised as an inexpensive paperback.

Get the book on Amazon.