From My Bookshelf: Mystical Origins of the Tarot by Paul Huson 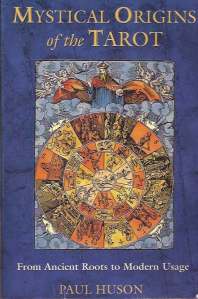 The other day, when I needed to check something concerning 15th-century suit symbols, I knew just where to go — Huson’s book on the history of tarot. The title is rather misleading, since there’s no mystical hokey-pokey; just solid, well-researched history.

The book is especially strong on the fifteenth century, which many authors skim over in their rush to the better-documented 19th-century occultists. Huson also gives a thorough discussion of the origins of the suit symbols and possible symbolic attributions to the four suits — another subject most popular authors gloss over.

I’m especially thrilled that he sees the trump images coming from popular late-medieval culture and theater, since I happen to agree with him 🙂 There’s a lot more to this book: a discussion of Lot Books and the origins of divination with cards; Etteilla as a possible link to Italian card reading; and a sensible survey of occult tarot and trends in divination.

The book is an especially valuable reference because the discussion of every card is followed by a list of divinatory meanings from several different sources from the 18th to the early 20th centuries. There are also numerous line drawings of early decks and related works of art.

This book is a wonderfully accessible survey of tarot history and a resource I refer to often.