Was Etteilla Influenced by Piedmont Tarot? 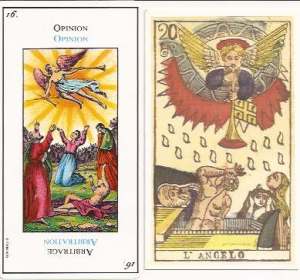 Etteilla, tarot super-star of mid-1700s Paris, claimed he studied tarot from 1757 to 1765 at the urging of “an aged Piedmontese”. In his memoirs, a Parisian actor who was Etteilla’s contemporary, describes visiting Italian fortune tellers in Paris. It’s not a stretch to imagine Etteilla learning card reading from one of them.

If this elderly Piemontese teacher was in his 60s in 1757, then he was born a little before 1700. He may have learned to read tarot in his youth in the 1720s from a teacher who could have learned the cards around 1680. This would make Etteilla the bridge to a very old Italian card reading tradition.

What deck would Etteilla’s teacher have used in 1757?

The first Piedmont deck we know of was printed in 1760 by Giuseppe Lando of Torino. But there were probably Piedmont-style decks before then. Did this elderly tarot reader arrive in Paris from Piedmont with his regional deck, or with a standard Tarot de Marseille? 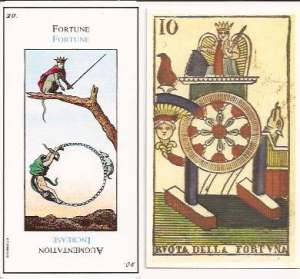 Etteilla was the first person to design his own deck illustrating his esoteric philosophy. I looked through the Grand Etteilla published by Grimaud (the deck closest to Etteilla’s original design), to see if I could detect any Piedmontese influence. Only a handful of details might qualify. The strongest contenders are card 16 “Opinion” (illustrated above) showing several people in an attitude of fear like the Judgment card in the Soprafino and Piedmont styles. On card 20 “Fortune” there’s a human figure on the left side of the wheel and a crowned king on top, similar to Piedmont cards.

Etteilla’s deck dropped into obscurity rather quickly. But his card meanings have had a huge influence on modern tarot. James Revak posted a statistical study on his website about fifteen years ago, showing that forty-nine percent of the card meanings in A. E. Waite’s book The Pictorial Key to Tarot were derived from Etteilla. If you think the Four of Cups means “boredom”, the Queen of Swords is a widow or other unhappy woman, and you associate the High Priestess with keeping silent, then you are using Etteilla’s divinatory meanings.

Etteilla’s card meanings are quirky and probably come from a folk cartomancy tradition. Was it the Italian tradition of his Piemontese teacher? Were some of Etteilla’s innovations, like the use of reversals and spreads, actually transmitted from his Italian teachers?

Until we know more about traditional Italian cartomancy, we’ll never be able to say for sure if it influenced Etteilla. But, Etteilla gave so much to tarot; I like to think that passing on parts of an ancient Italian folk tradition is another reason to admire him.

Don’t know who Etteilla is? Read about him and his milieu here.