I’m very pleased with the quality of the cards and book, a collaboration between Czech artist Jindra Capek and writer Vlasta Duskova. The twenty-two cards are set into a niche at the bottom of a sturdy box which holds a 110-page hard-bound book that’s extensively illustrated in color.

Unfortunately, the book starts with a cringe-worthy history of tarot. Ancient Egypt, Kabbalah, alchemists, witches and Italian tarocchi are mentioned on the same page and given the same weight. The author states that tarot’s purpose is occult initiation into Kabbalistic mysteries. Twentieth century Czech and French esotericists are quoted as being the authority on tarot’s ancient origins. We’re also told that medieval tarot users were burned at the stake for being heretics.

The deck uses the European system of assigning the Hebrew alphabet to the cards. The Magician is Aleph, with the alphabet running up the cards and ending with the Fool as Shin. (In the Golden Dawn system the Fool is Aleph, displacing the letter attributions by one card).

Each card gets two double-page spreads displaying a full-page reproduction of the card, a poem, and a general interpretation. This is followed by a discussion of the number, the Hebrew letter, and two sets of astrological associations. Each card is also assigned an abstract geometric symbol called a Pentacle.

The cards are lovely, with clean lines, bright, pleasant colors, and the associated Hebrew letter on the bottom border. They are a bit larger than most cards — 3.5 by 5.5 inches. 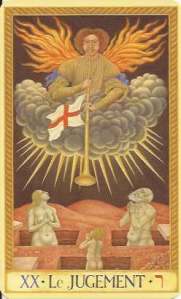 The deck sticks closely to mainstream TdM imagery, with these notable exceptions:

This is a good beginner’s deck if you’re curious about esoteric tarot. It’s also a nice, inexpensive collector’s item.