The World in Play: 15th Century Playing Cards at The Cloisters

Luxurious playing cards from the 15th and early 16th centuries, including two tarocchi decks, are on exhibit at the Cloisters in New York City until April 17, 2016. This is a unique opportunity to see Visconti Sforza and Visconti (Carey Yale) cards side-by-side.  If you can’t make it to New York, you have alternatives for seeing these cards.

The exhibit catalog has 130 lavishly illustrated pages. Larger-than-life card illustrations dominate the explanatory text. The exhibit focuses on German playing cards, while the catalog shows images shared between German block printed and engraved cards, Italian playing cards, easel painting and book illumination. For example, all the suit symbols in the Cloisters hunting-themed deck (dog collars, tethers, horns and nooses) appear together in a breviary page decorated with a hunting scene painted about 1510.

Every artist’s workshop came equipped with pattern books of animals, flowers, and people of all ranks doing various activities. Apprentices copied figures from the master’s book to take when they left to work elsewhere. It’s fascinating to see the same figure pop up in several places.

For instance, a man facing left, his weight on one foot, the hand furthest from us held out, while the other arm is hidden by his cloak appears as the Visconti Sforza Page of Coins and in three German block printed decks from the same decade. The same pair of hounds appears with the Zintilomo V engraving of the so-called Mantegna Tarot, the 2 of France in the Courtly Household Cards, and the Four of Hounds in the Stuttgart hunting deck. I’m going to stay alert for more repetitions as I look at art from this era.

The earliest German block printed cards to survive are the Italian-influenced Liechtenstein Playing cards from @1450. They have Italian suits and the batons look like polo mallets, possibly a lingering Mamluk influence.

The stars of the show are four exquisitely painted decks: The Cloisters (also known as Flemish) playing cards, the Courtly Household deck and the Stuttgart playing cards. My favorite is the suit of Herons from the Courtly (Ambras) Hunting Cards with its exquisitely detailed landscapes. The catalog points out stylistic similarities with Konrad Witz, a painter active in Basel in the mid 1400s. Several of the court cards in this deck are very similar to figures in his religious paintings, so it’s almost certain the deck came from his workshop.

Tarot is a minor part of the exhibit. Only ten of the 35 Visconti Sforza cards held by the Morgan Library are displayed, with only five of the 69 Carey Yale (Visconti) cards. My spy at the scene tells me this latter deck is stunning because the heavily-textured gold glitters in the light.

The most unique deck in the show was printed by Peter Flötner in Nuremberg about 1540. The cards show scenes of peasant and bourgeois life, some bawdy and scatological. Musical notation in four-part harmony appears on the card backs. Each suit is notated with a different part (alto, soprano, etc.) making it possible to sing the music while holding a suit of cards. 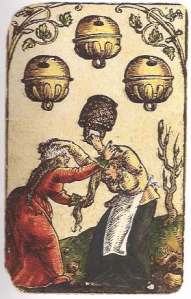 A lucky friend who can walk to the Cloisters from her home has seen the show twice and plans to go back at least twice more — the exhibit is that fabulous! Here are other ways to see these cards if you can’t make the trip to New York.