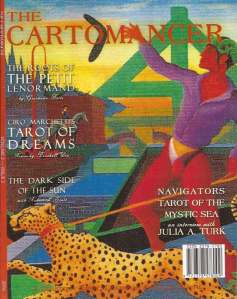 There’s plenty in this issue of The Cartomancer to keep a history nerd happy!

As usual there are several pages of images from new decks printed in saturated color on a rich black background, reviews of several tarot and Lenormand decks, and general interest articles that should please everyone.

Get a print or electronic copy at TheCartomancer.com