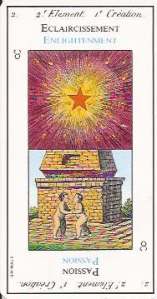 At least three times in the past few weeks I’ve heard people refer to “the hairdresser Etteilla,” mindlessly repeating disinformation that Eliphas Levi and A. E. Waite rather viciously spread about the founder of modern tarot. Etteilla-bashing hit its stride in the mid-19th century when Eliphas Levi published statements like:

Etteilla or Alliette, an illumine hairdresser, exclusively engrossed by his divinatory system, and the emolument he could derive from it, neither proficient in his own language nor even in orthography, pretended to reform, and thus attribute to himself the Book of Thoth.

This illuminated hairdresser, after working for thirty years, only succeeded in producing a bastard set, the Keys of which are transposed, so that the numbers no longer answer to the signs.

The writings of Etteilla, now very rare, are obscure, wearisome and barbarous in style.

Generations of authors have mindlessly parroted Levi without bothering to learn about the man behind the slander.

Why all the animosity?

Some of it was class snobbery. Etteilla had a clumsy writing style that showed his lack of formal education and his working class origins. High-minded occultists like Levi and Waite were appalled that Etteilla shamelessly used the sacred tarot for the vulgar activity of reading cards for housemaids. (Somewhat hypocritically, Waite managed to overcome his horror and revulsion long enough to include over 150 pages on divination in his book Pictorial Key to the Tarot.) Worse, Etteilla demonstrated monumental ignorance by scrambling the order of the trumps, then assigning alchemical and astrological attributions to the cards rather than the Kabbalistic Hebrew alphabet correspondences that still maintain a grip on esoteric tarot.

Why a hairdresser and not a ditch digger or dogcatcher?

Etteilla’s death certificate was witnessed by two people: a master hairdresser and Etteilla’s son, a grocer, whose address was listed as “the hairdresser’s house.” Somehow these hairdresser references got attached to Etteilla. Actually, his family engaged in various food-related trades. He started out as a seed merchant and later dealt in antique prints and imported tarot cards.

Why Etteilla deserves our respect

He was a one-man cartomantic phenomenon flourishing in Paris just before the Revolution. He wrote the first books we have on card reading and divination with tarot; he operated a school of tarot and astrology; and he wrote numerous books on card reading, palmistry, astrology and other occult subjects. He popularized the use of spreads and reversed cards, and his divinatory meanings for the minor arcana are the bedrock of the Waite Smith system. He was the first person to design a deck illustrating his occult philosophy accompanied by an explanatory book. His deck is still published by Grimaud/France Cartes.

Etteilla devoted his life to studying tarot as a sacred text and a tool for divination. When he died he left a small band of loyal students who carried on his teachings for decades. He deserves respect as the first modern, professional tarotist.

Want to read about other popular tarot history errors?

Rant #1 The Mists of Time