From My Bookshelf: Courts and Courtly Arts in Renaissance Italy 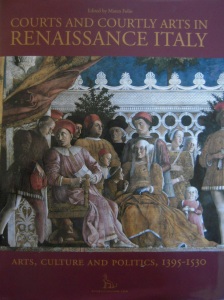 If you want to immerse yourself in the world that gave us the Visconti-Sforza and Sola Busca decks, this book, subtitled Arts, Culture and Politics 1395 to 1530, will deliver.

Nothing was ever the same in Italian politics and society after Gian Galeazzo Visconti purchased the title of Duke from the Holy Roman Emperor in 1395. Other rulers soon followed suit: the Gonzaga of Mantua, Montefeltro of Urbino, d’Este of Ferrara and the rulers of Savoy.

Unlike a French or German aristocrat who could trace his pedigree back to Charlemagne, a newly-minted Italian duke did not have a divine right to rule. These parvenus were acutely aware of their modest origins as merchants or condottieri who had usurped civic power. They felt tremendous pressure to over-compensate by amassing a trophy art collection and building ostentatious palaces that were stage settings for elaborate ceremonies and festivals.

By the end of the 15th century, the largest courts kept hundreds, sometimes thousands of artists, secretaries, workmen and bureaucrats on salary. They comprised a significant percentage of the population and offered unprecedented opportunities for social mobility if you were ambitious and even moderately talented. 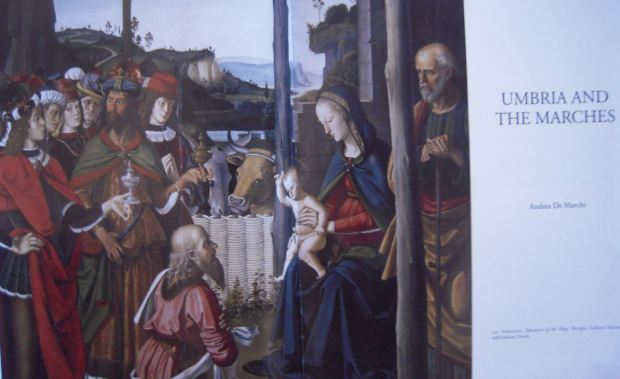 Each city-state and its court is featured in its own lavishly illustrated chapter. I was delighted to read about smaller political entities like the Marquisate of Saluzzo in Piedmont that had strong ties to the Parisian International Gothic. Its famous fresco in the Manta Castle of Nine Heroes and Heroines faces a crowd cavorting in their underwear in the Fountain of Youth fresco. Then there’s the Marquisate of Montferrat whose rulers were a minor branch of the Byzantine Palaeologus family and served as condottieri for the Sforzas. These small states were short on natural resources and relied on their armies to bring in the income necessary for their courtly lifestyle.

I was surprised at the extent condottieri economics pervaded Italian culture. Nearly every duke was in the rent-an-army business. Francesco Sforza was the most expensive and the most capable. Federigo da Montefeltro of Urbino was the quintessential warrior-humanist-art patron. An illegitimate son who received an excellent humanist education in Venice and Mantua, he led Urbino’s army, fought as a mercenary for Filippo Maria Visconti, never lost a war, and prided himself on never taking a bribe to change sides. When his half-brother, the Duke, died suddenly and mysteriously, Federigo was perfectly situated to waltz into Urbino with his troops, take command, and set up the most polished and splendid court of mid-century. The Courtier by Baldassar Castiglione celebrates an idealized Urbino court where other dukes sent their sons to finish their training.

The greatest condottieri were honored by the greatest artists of the day. Ucello painted a fresco of John Hawkwood, the paradigm of the courtly warrior in the previous century. Donatello, Verocchio and Leonardo da Vinci did equestrian statues of Gattamelata, Colleoni and Sforza.

Bartolomeo Colleoni was a great friend and military companion of Francesco Sforza. He was a condottiere who never acquired aristocratic rank, but still maintained a princely lifestyle in his hometown of Bergamo. He bought a rundown castle outside of town and turned it into a splendid court where he staged festivals and tournaments for visiting dukes and princes.

A Colleoni descendant owned the Visconti-Sforza deck in the late 19th century and was responsible for breaking it up. The Colleoni family of Bergamo still own thirteen cards from the deck. Were the cards a gift from Francesco to his old friend and comrade Bartolomeo? Perhaps the Colleoni family acquired the deck from Duke Sforza after the French invaded Milan and his world began crumbling around him.

The longest chapter, enhanced with numerous maps, summarizes the political and military situation in the 15th century. Surprisingly, this was considered a time of unusual stability. A balance had been established with Milan as the dominant power in the north. The Pope, back from exile, was firmly established in the Papal States; while Alfonso of Aragon ruled the Kingdom of Naples and the southern peninsula. There were only five powers that counted: Milan, Naples, Venice, Florence and the Papal States. All the regional wars and skirmishes of the century were played out in the context of these major powers.

This over-sized book has a 30-page bibliography and illustrations on nearly every page. The book is hefty in both price and actual weight (seven pounds), but I found it online for one-third its retail price of $95.