From My Bookshelf: Mesmerism and the End of the Enlightenment in France 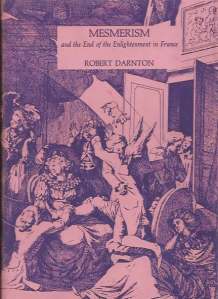 Are you ready for immersion in the electrifying atmosphere of pre-revolutionary Paris? Etteilla, Cagliostro and de Gebelin flourished in this era of scientific marvels, crackpot inventions and magnetic healing. Pseudo-science, alchemy, astrology, and fantasies of the Golden Age swirled about uncritically in the public mind. In this atmosphere, stories of golden tablets under the pyramids inscribed with ancient wisdom didn’t seem the least bit implausible.

The book shows us this world through the eyes of a literate Parisian in the 1780s, just before the Revolution. The author, respected historian Robert Darnton, chose mesmerism as the lens through which to view the times. Mesmerism infused the popular culture from cartoons to cabaret shows to Mozart’s Cosí Fan Tutti. The hottest ticket in town was for an afternoon in Mesmer’s purple-draped salon as part of a human chain around a tub filled with water and iron filings. A mild electric current guaranteed getting a tingle from the experience; and the supercharged atmosphere often produced swooning, catatonia, and visionary trance states. 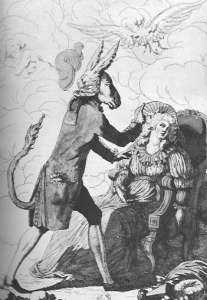 Mesmerism touched all the hot button issues and deepest longings of the times. It provided:

Anton Mesmer arrived in Paris in 1778 after closing his magnetic healing clinic in Vienna. With his charismatic personality and friendship with luminaries like Mozart, he quickly acquired a following of middle- and upper-class Parisians hoping to cure their ailments by unblocking their vital fluids. Since Mesmer never learned French, he depended on his followers to spread his teachings. One of his closest associates was the former clergyman Antoine Court de Gebelin.

De Gebelin was obsessed with using linguistic analysis to uncover the truth about the primal human civilization of the Golden Age. His magnum opus, the multi-volume Le Monde Primitif, had over 1,000 subscribers. He was a success on the lecture circuit, and was considered a serious philosopher and historian. His story about ancient Egyptian magi inscribing their wisdom pictorially on twenty-two tablets under the pyramids fed into the popular longing to revert to the simpler, more natural times of the ancient world.

De Gebelin’s association with Mesmer led to his untimely end in 1784 when he was electrocuted during a healing session. The Bodleian Library has a copy of Le Monde Primitif

where a previous, rather irreverent owner inscribed the following ditty on the flyleaf:

Here lies poor Gebelin / Who spoke Greek, Hebrew and Latin / Everyone, admire his heroism / He was a martyr to magnetism.

This slender, scholarly book is a quick and entertaining read. Professor Darnton proposes that mesmerism was the last gasp of the French Enlightenment and a bridge to the romanticism of the following century. He continues the story by showing mesmerist influence on utopian communities, a fascination with the occult, and the novels of Balzac and Victor Hugo which were rife with magnetic rays, invisible fluids and unseen spirits.

Darnton, Robert. Mesmerism and the End of the Enlightenment in France. Harvard University Press, 1968.

Additional information on de Gebelin from: