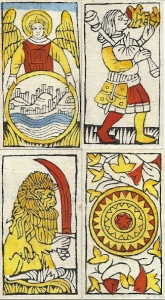 In the 1440s, you could go to the store and buy a pack of cards for playing the popular new game of Trionfi. What did those cards look like? Did they resemble our familiar tarot cards? We can’t be sure because not a single printed tarot deck survives from the 15th century. All we have are a handful of gold-covered cards commissioned by wealthy aristocrats. Luxury decks like the Visconti-Sforza prove that by the mid-1400s tarot decks had 78 cards including our familiar twenty-two trump cards. But we don’t know how closely these luxury decks resembled cards printed for the masses.

Back then, playing cards were printed using wooden blocks resembling large rubber stamps. Cards were printed in sheets of about twenty. Paint was stenciled on, then the sheets were cut up into individual cards and stacked into a deck. If there was a flaw somewhere, the entire sheet was recycled and often used in book binding. Occasionally, when a restorer disassembles an antique book, a sheet of tarot cards will be found padding the inside the covers. Several of these sheets have made their way into museums and private collections and are known by the name of the collection where they reside.

The tarot sheets held by the Museum of Fine Arts in Budapest are comprised of all the trump and court cards and the suits of swords and batons. Duplicate sheets printed from the same woodblock were sold to the Metropolitan Museum in New York City in 1922. A private collection in New York owns a small section of one sheet, and the Cary Collection of Playing Cards at Yale University owns another duplicate sheet plus a stencil used to color one of the sheets in the Budapest collection.

Out of the tens of thousands, if not millions, of decks printed in Italy in the 15th century, only a handful of uncut sheets survive. It’s either an extraordinary coincidence that so many cards printed from the same wood blocks were preserved, or this particular deck was very popular.

These sheets are very important for understanding the early history of tarot. They could only be seen online until recently, when Belgian graphic designer Sullivan Hismans faithfully reproduced the images of both the Budapest and Rosenwald sheets, then printed them as decks. Hismans’ decks are so accurate that it’s impossible to find a discrepancy when comparing his cards with online images of the originals. Now we can hold a valuable piece of tarot history in our hands. 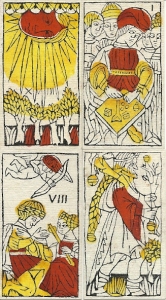 All the traditional twenty-two trumps are present, but some cards have slightly different designs. A crowd of onlookers watches the Bagatto. The Lovers are a courting couple with Cupid helping things along. The Fool strides through the countryside holding a tree branch decorated with bells. This deck has one of the most cheerful and life-affirming Sun cards.

After examining the clothing on the court cards, I believe the deck was designed in the 1470s, but some of the styles go back to the very early days of tarot in the 1440s. Playing card designs were very conservative. When one set of wood blocks wore out, designs were often copied onto new blocks. It’s quite possible that this deck transmits a remnant of the earliest days of tarot.

Hismans reproduced the lines of the original woodcuts with pen and paper and digital drawing. Eight trump and court cards are partly missing from the original sheets and had to be hand drawn with pen on paper to complete them. The cups and coins suits no longer exist and were recreated using other sheets in the Budapest collection.

The areas of stenciled color on the original sheets are faithfully reproduced. Hismans applied paint to paper, photographed it then applied it digitally to the cards. The original yellow has faded to tan, and the red paint shifted toward orange, so Hismans gives us the original bright, cheerful colors. The two highest trumps, Justice and World, have blue areas that may have been hand-colored. These have been duplicated exactly.

The card backs are a black and tan diamond pattern. Only 250 copies were digitally printed on 350 gram card stock with a light glossy finish. They are sturdy yet flexible and not too thick. At 2.25 x 4 inches, the cards are slightly smaller than most decks, but shuffle easily and are very usable.

In previous centuries, cards were packaged for sale in heavy paper envelopes printed with ornate designs and the card maker’s name and address. Hismans learned block carving in order to understand how the lines on the cards were made. He used this skill to carve a unique envelope design, paying tribute to the original printer by incorporating the Fool’s tree branch. The deck is signed and numbered on the inside of the envelope.

Reading with the Budapest Deck

If you’re an experienced TdM reader, the suit of swords will take some mental adjustment. The swords are curved outward and are bound together by a gold crown. The straight sword in the odd numbered cards is uncolored. A curved band behind the sword hilts seems to be holding them in place.

The crown brings to mind worldly power and prestige. Two of the swords court cards are warlike: the Knight is a warrior in armor and the Page is Hercules wearing his lion skin. One could read the sequence from two to ten as a struggle for power and glory. But crowns are worn on the head. Perhaps these crowns are gathering up and focusing thoughts.

If you’re comfortable reading with the Tarot de Marseille, the Budapest deck makes a fun and intriguing alternative.

Get this deck and the Rosenwald deck at Sullivan Hismans’ web page www.TarotSheetRevival.com