The deck’s name had me puzzled for a while. It looks French but makes no sense in that language. Then I checked out the creator’s website — Aux Arcs in French is pronounced Ozark, the mountains where the artist lives.

The deck creator, Lori LaPage, says this deck is not a Tarot de Marseille and it doesn’t read like one. But I respectfully disagree. The imagery is solid TdM rendered in acrylic washes and lively black lines that perfectly capture the energy of each card. The higher-numbered swords cards look heavy and sinister, while the cups are in a party mood with their flowers and ribbons. The batons burst with vitality. Every card sings with energy, making it easy to interpret. The backs radiate the same high energy with gold starbursts on deep red.

One of the more whimsical cards, the Page of Coins, looks like he’s puckering up and getting ready to kiss the coin in his hand. Or is it a bagel? The black Papesse, one of my favorites, is colored by the deep mysteries she transmits.

Card titles are in French, and the names on the court cards can be difficult to read, so it helps to have some background with the TdM. The pips are not labelled with the suit name and the trumps have names only, no numbers. Some cards have features that echo earlier historic decks:

The deck is playing card size, 4.75 x 2.75 inches, smooth and easy to shuffle. It comes shrink-wrapped and does not have a card with identifying information, so I made up an index card to keep with the deck before I forgot its vital statistics. 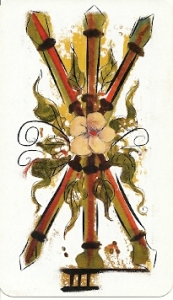