A square Tarot de Marseille with cards that can be turned in any direction! Pips arranged in triads according to a system described by the French occultist Papus. This radically unique deck will spark your intuition and give you a solid system for interpreting the pips. The sixty-page booklet that comes with the deck gives you everything you need to read with it. It’s great fun playing with the possibilities in these cards. Let’s look at each component of the deck in detail.

The hand-drawn images have a charming folk-art feel. Every card has a stream of water that links it to neighboring cards, as well as atmosphere and vegetation you don’t find in traditional decks. Two cards stray from the TdM tradition: The Empress is Waite-Smith-ish with wheat and a waterfall. Judgment has no people, just a large angel and trumpet. The deck comes with Jupiter and Juno cards to substitute for the Pope and Papesse if you wish. I’m going to keep them aside to use as significators, on the rare times I need them.

Each trump has a range of meanings depending on its orientation. Upright is optimal. If the figure is face down it’s gone to extremes and is falling on its face. A figure on its back facing up is weak, hesitant, delayed, and not fully expressing its potential. A reversed card is blocked or behaving badly. To read interpretations for each trump, find the card in the booklet, turn the page so the card has the same orientation as in your spread, then read the keywords at the top of the page.

I like this system. It gets you thinking about a range of meanings for each card – expressing too much or too little of the card’s core meaning. The booklet’s interpretations are easily transferred to a more traditional deck.

There’s plenty here for intuitive reading: one figure stepping on another, the rain in one card falling on an adjacent card, the wind blowing through multiple cards, figures mirroring each other. The deck comes with a paper outlining steps for getting acquainted with the trumps that are useful with any new deck.

If you’re floundering with learning the pip cards and need a system, this deck embodies a tradition from 19th-century France that can be used on any deck with non-scenic pips. Remember “Thesis-Antithesis-Synthesis” from philosophy class? It’s the bedrock of this system. In each suit, Ace, two and three are the thesis or commencement of a situation. Four, five and six are the antithesis or opposition to the commencement. Seven, Eight and Nine are the synthesis, resolution or equilibrium of the situation.

There are twelve pip cards in the deck, three for each suit, since each triad is shown on one card, and ten is included with the final triad. In a reading, whichever pip is at the top of the rotated card is the only one read. As with the trumps, the booklet gives keywords for each card which you find by turning the page to the same orientation as the card in your spread.

There are four court cards in the deck, one for each suit. Their appearance and interpretation are traditional and similar to what you find in most TdM books. These cards are a handy resource for getting acquainted with the TdM courts.

Tarot: A Strange and Wondrous Thing

This 388-page, spiral-bound book can be purchased separately from the deck. It stands up to any of the classic Tarot de Marseille books available today. Detailed divinatory meanings are given for each card. The cards are analyzed from many angles: number, colors, details of vegetation and variations between different historics decks are discussed. Read excerpts from the book on the website (link below).

How to do a reading

The sixty-page booklet that comes with the deck has all you need for interpreting a spread. It has keywords for all the cards, an explanation of the triadic structure of the pip cards, spreads, and instructions for shuffling the cards and doing a reading.

The tops of the cards can point in four different directions. To make this happen, interrupt your shuffling three times, grab several cards and turn their tops to the left, right or bottom. Or easier still – just spread the cards out and stir them around in a pile.

There are certain limitations with this deck: You can’t get two court cards of same suit in a spread; and you can’t get two pip cards of same suit from the same triad – for instance the Two and Three, or Seven and Eight, of one suit. There are only four court cards and twelve pip cards, so these don’t show up as much in a spread and have more weight when they do. Since the pip cards have precise meanings, I take them as the final answer. Get around this limitation by dividing the deck into trumps, court cards and pips, then picking one card from each stack for a three-card spread.

Turning the trump cards in four directions and reading them intuitively more than makes up for these constraints. I’ve done many readings with this deck and never felt limited. The booklet gives several spreads: A line of 3 cards and a grid of four or nine cards based on a past-present-future layout. I’ve shown a sample reading at the end using my favorite technique: laying four cards in a grid with no spread positions.

About the Deck Creator

Annette Wakulenko became fascinated with tarot as a child when she saw an old block-printed card in a book. Her passion, which I share, is to deliver tarot from the grip of the Golden Dawn/Waite Smith paradigm and introduce Americans to European decks and reading styles. She drew the cards herself in the style of block printing, then took early retirement to devote herself to the deck and book. This project is the product of fourteen years’ labor of love. Her passion for tarot shines through every page.

Get a feel for her system by reading book excerpts.

Find detailed interpretations of the trumps under the “Articles” tab

How to Get the Deck and Book

Ordering is low tech. Download and print an order form on the website and mail it in with a check or money order. USA only. 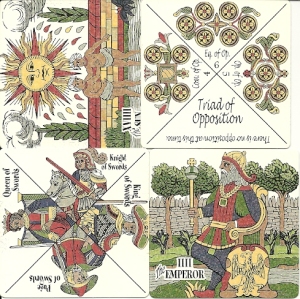 I shuffled the deck while turning the cards randomly in all four directions. Then I laid out a grid of four cards with no specific spread positions. You only read the top quadrant of the pip and court cards.

My Question: For four years, I’ve been submitting articles on tarot to a certain magazine. Next year the magazine is either going to have a new owner or it will cease publication. What does this mean for the series of articles I’ve been working on?

The Sun: This card is tilted so the sun is on the eastern horizon. Sunrise is a time of increasing light and energy. My articles are written in collaboration with another author, so the two figures on the card are appropriate. This is an optimistic card of bright prospects.

Six of Coins: In the Triadic system, Six is the equilibrium of the opposition triad. The booklet tells me that gains and losses are balanced out. I’ll lose the magazine, but I have an idea for another platform for the series. The Sun gives this card a positive spin.

Emperor: Upright, he represents tradition, stability and wisdom. Since I write about history and tradition, this represents my writing project. The Emperor seems to be handing his staff of authority to the Knight of Swords. The booklet says the Knight represents good news and speed.

It seems I’ll lose my current publishing outlet, but it won’t matter because I’ll take off full speed with an alternative.

Tags: how to read the Tarot de Marseille, Papus, Triadic Tarot
From: Tarot Decks, Tarot Reading Tips
← Rereading the Classics: Yoav Ben-Dov
Spread and Reading with I Tarocchi Lando →
No comments yet