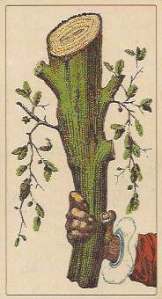 It’s Spring Equinox this week when the Sun enters Aries! This cardinal fire sign shares the spontaneous, passionate and freedom-loving energy of the Knight and Ace of Rods. These two cards conjure up the image of a hero galloping over the horizon brandishing a blazing torch.

In the Tarot de Marseilles, the image is gentler than in Waite-Smith-style decks. The Knight of Rods has stopped his horse so he can offer a leafy branch or a bouquet to someone standing just beyond the card’s border. In some decks his expression seems a bit flirtatious.

This year, the Knight gets a booster rocket of energy a few days after the Equinox when the New Moon is conjunct Uranus and Mercury, all in the first four degrees of Aries. In Tarot terms this means a pile-up of the Moon, Sun, Magician and Tower cards, presided over by the Knight of Rods and fueled by the Ace.

I’m going to simplify things and just work with the Knight, Ace and Tower. The Knight’s staff becomes a flame-thrower lobbed at the Tower, cracking the walls of an edifice of negativity, bad habits, clutter, procrastination, fears, unsatisfactory relationships, and anything else that has encrusted your life in the past year.

If you’ve been enduring bad times recently, the Tower/Uranus splits the storm clouds so a ray of sunlight can stream through. If you’ve been struggling uphill to accomplish something, this is the energy boost that will get you moving forward. If things just haven’t been going your way, the Tower is the universe’s gift of a lucky break, a sudden shift and renewed hope.

Working with the cards

Pull the Ace and Knight of Rods and the Tower out of your deck. If you’re just learning the TdM, you might want to use two decks, the TdM and another deck you’re more familiar with. Pick a deck with the fieriest Knight and Ace.

Study the cards carefully. How would it feel to have this particular Knight gallop up to you? The Ace is a gift. What is the Knight giving you? What story is the Tower telling? Is it all doom and disaster, or can you see how it might represent release from a prison of isolation and narrow opportunities?

Shuffle the rest of the deck and fan it out face down in front of you. Then picture the following scene:

It’s a sunny day in spring and you’re standing on a prairie covered in fresh, green grass and spring flowers. There’s a rumbling in the earth and a sound like distant thunder. A horseman gallops over the horizon coming straight toward you brandishing a flaming torch. He skids to a stop in front of you and you see that he’s actually holding a staff glowing with magical light. He offers it to you with a flourish and it turns into the one gift you need at this moment in your life.

Close your eyes and feel yourself in this scene. Then run your hands over your cards and intuitively select the card that shows you your gift. How can this card be used to re-energize and reinvigorate your life? Can it be used as a tool to de-construct the Tower’s walls and break down whatever has been keeping you trapped inside?

What if the gift isn’t really what you had in mind, or it’s a card you usually see as negative? Are the Tower’s walls made of this card’s energy? Is this something you need to blast away so you can free yourself from its influence?

You might want to pull another card for clarification, or design a spread on the spot to question the card about what it has to offer you. Then make a list of things to do, or to do differently, in response to the gift.