The Golden Tarot – A New Visconti-Sforza 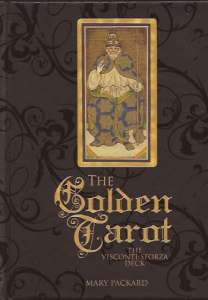 One of the most attractive Visconti-Sforza decks on the scene is offered by Race Point Publishing. This is not a facsimile deck — the cards have been touched up. The images are very faithful to the original; and mercifully, there are no distracting numbers or titles on the borders. The faces are livelier and more expressive than in the original deck, the lines are sharper, and details are easier to read.

Thanks to the antique gold borders, the soft gold background on the pips, and the overall mellow glow, this deck deserves the name “golden”. The cards are 3.25 x 6.5 inches — slightly smaller than the originals but much larger than standard tarot decks. The deck retains the original 2:1 ratio between height and width, which is aesthetically important.

The replacement cards are a major consideration with any V-S deck. Race Point does a middling job. The Knight of Coins looks like he belongs with the rest of the suit, which is more than some publishers manage. Nearly every publisher gives us anachronistic Tarot de Marseilles designs for the Tower and Devil, and this deck is no different. But these cards have some nice medieval touches. The Devil is rather lurid and owes a good deal to the U.S. Games/AGMuller Devil; but he wields a two-pronged, Inquisition-era grapnel. The Tower seems to be derived from Lo Scarabeo’s version, but it has a red sun in the upper corner, which is a feature in very old decks. 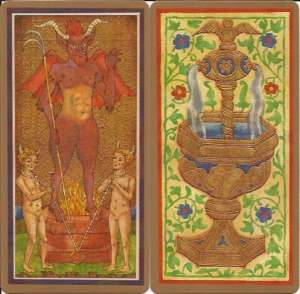 The set comes in a very sturdy, black, flip-top box. Inside we find the deck in its separate box, a 144-page hardback book, and a purple polyester spread cloth.

The book starts with a very readable illustrated history of tarot, then each card is discussed individually, accompanied by a color illustration. The divinatory meanings for upright and reversed cards owe a lot to the Waite Smith tradition, and not much to the actual fifteenth-century card.

Mary Packard, the author, believes the trumps are inspired by classical and hermetic literature which was re-discovered during the Renaissance. By extension, this associates tarot with alchemy and magic. She separates the trump sequence into three sets of seven cards depicting Plato’s three-part division of the soul. The entire trump sequence, she tells us, depicts a neo-platonic ladder ascending from human misery to divine perfection. She bolsters her Renaissance connection by linking Leonardo da Vinci with tarot via one very distant graphic similarity.

The problem with the Renaissance origin theory is that Marsilio Ficino translated Plato and various hermetic texts from Greek into Latin in 1484, nearly a half-century after tarot was invented. Leonardo was born in 1452, so he couldn’t possibly have influenced the first tarot decks. If you want to see what a Renaissance humanist tarot looks like, check out the Roman-themed Sola Busca deck here or Andrea Mantegna’s so-called tarocchi, with its figures for the muses, liberal arts, and cosmic spheres.

Misattributing tarot to the high Renaissance seems to be an unstoppable tsunami. But this history nerd won’t let the book’s minor flaws distract her from enjoying the beauty of this high-quality deck. If you want a lovely Visconti-Sforza deck for reading, or if you are new to reading with historic decks and aren’t sure where to start, I highly recommend this deck/book set.

Here’s the link to Race Point.