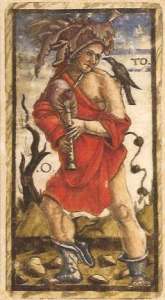 Deck collectors have three versions of the fifteenth-century Sola Busca deck to choose from: decks published by Lo Scarabeo, Il Meneghello, and Wolfgang Mayer. My hands-down favorite is the Mayer deck, currently sold by Giordano Berti, so I’ll describe it first, then compare it to the others.

In 1998, Wolfgang Mayer of Germany printed 700 facsimiles of the 78-card deck and sold a limited number of them. He’s now deceased and his remaining decks are being sold by tarot historian Giordano Berti of Bologna.

The cards are printed on smooth, heavy card stock and measure 82 x 150 mm or 3.2 x 5.9 inches. The backs are plain cream, and a tan border extends beyond the original border. It comes with a card signed and numbered by Mayer, and a brochure written by Berti with historical background and divinatory meanings.

The decks are beautifully packaged in boxes handcrafted by an artisan in the Florentine style. My deck is housed in a velour-lined box that looks like a book but opens like a treasure chest. The box is covered in blue and tan handmade paper with a miniature card pasted on the cover. You can see this box plus the black and gold alternate packaging on the website listed below.

To order the deck, email Berti at Giordano.Berti@gmail.com for Paypal instructions. With the exchange rate and shipping, the deck costs about $135, and it took two weeks to travel from Bologna to California.

SolaBuscaTarot1998Mayer.wordpress.com has historical information, many images of the cards, and Waite Smith images juxtaposed with the Sola Busca cards that inspired them.

Osvaldo Menegazzi, the artist behind Il Meneghello, received permission from the Italian Ministry of Heritage and Culture, which now owns the original deck, to make reproductions from the original. Menegazzi has created an edition of 400 copies of the 22 trumps. Menegazzi’s decks are always lovingly hand-crafted, high-quality works of art housed in hand-made boxes. The boxes for this deck have a roman coin affixed with red sealing wax, in keeping with the theme of the deck.

Il Meneghello’s deck retains the original border and rounded corners, rather than having the additional border of the Mayer deck. Otherwise the Il Meneghello and Mayer decks appear to be identical. I’ve never seen one in person so I can’t comment on the quality of the paper. I’ve been told the colors are a bit darker than the Mayer deck.

This 22-card deck costs about $135 US dollars with shipping. To order, email Il Meneghello’s business manager, Cristina.Dorsini@me.com for the total cost with shipping to your area and Paypal instructions.

Menegazzi’s Facebook page Sola-Busca has many photos of the cards.

Lo Scarabeo named their 1995 reproduction of the Sola Busca the Ancient Enlightened Tarot. The cards are standard modern card size, the colors are brighter, the lines are sharper and the details easier to read. The images are very faithful to the original.

The top black border of each card has the name printed in four languages, with the card number at center. On the bottom border, the Italian card name is centered in a white insert. The booklet gives generic divinatory meanings that have no connection to the deck.

If you’re really serious about studying the Sola Busca, I suggest getting this deck along with the Mayer and studying them together. With Mayer you get the original cards as they look now, but Lo Scarabeo’s cleaned-up version allows you to see details that have faded on the originals.

This deck is out of print but I’ve seen used copies for sale online at a reasonable price, so you may want to grab one before the price goes up.

What is the Sola Busca Deck?

The Sola Busca is an extremely important 15th century deck illustrated with historic figures and alchemical emblems instead of the usual tarot imagery. Click here for historical background and a list of books and websites.

Here is Trump V, Catulo, from the three decks reviewed here: Mayer, Il Meneghello, Lo Scarabeo. (The Lo Scarabeo card is actually much smaller than the others). 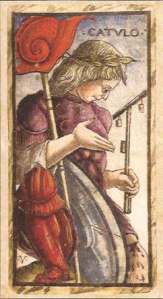 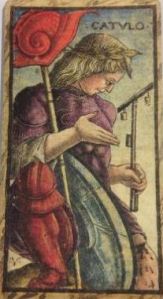 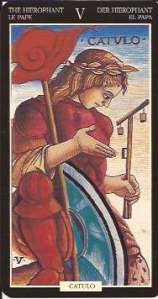