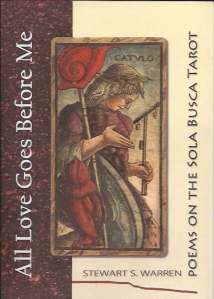 Opening these evocative books of poetry based on the 15th-century Visconti Sforza and Sola Busca decks releases a gentle magic into the air. The tarot figures speak for themselves in these elegant, imagistic poems, opening up surprising revelations about each card. Energy hums between the poems and color photos of their cards on the facing page.

All Love Goes Before Me: Poems on the Sola Busca Tarot

Tarot historian Giordano Berti sets the mood in his preface by invoking the muses and a lineage of alchemist-poets, while telling us the poems are “access portals to another dimension.” In the introduction, Il Meneghello’s art director, Dr. Cristina Dorsini, conjures up the special magic of this deck.

Stewart’s poems take us on an alchemical journey beginning with 0. Mato which starts

Caught in the blackness
of Raven’s gaze, I look into
a self I do not know.

And finishes with XXI. Nabuchodenasor

In between, the gently surreal imagery pulls us into a visionary landscape. One of my favorites is from XVIIII Sabino:

Whether I draw symbols in the dirt
Or in the air, the bees
Write love across the sky.

Pointing to my Heart: Poetry Journey through the Visconti-Sforza Tarot

The tarot figures in these poems often express awareness of how they are perceived and how these perceptions change over time. Il Matto makes a sly reference to how he’ll evolve through the centuries from shunned beggar to free spirit:

Later they’ll dress me in pinwheels
credit me with beginnings,
mystery, string theory.

Many of the poems end with a humorous or satirical twist. Il Traditore (The Hanged Man) says

If enough blood rushes to my head
I may get my thinking straight.

The Visconti-Sforza deck has been my companion for nearly two decades. Every poem in this book made me smile at seeing my old friends rendered in a new light.

Stewart is the author of numerous collections of poetry, most recently a collection based on the Mantegna tarocchi. Here’s a link to  his Amazon page.

Card illustrations are from facsimile decks produced by Il Meneghello of Milan.