Portrait of a Lady – Tarot in a 15th-Century Murder Mystery 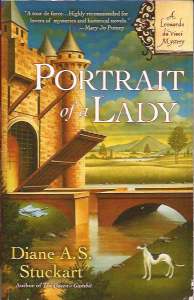 This book has everything a mystery-loving, tarot history nerd could desire: brisk pace, tight plot, illicit love, murder at the Sforza court, and those four missing cards from the Duke of Milan’s Visconti-Sforza deck.

Diane Stuckart has written three mysteries set at the court of Duke Ludovico Sforza in the early 1490s, when Milan was at the height of its splendor and economic power. As artist in residence, Leonardo da Vinci tinkers with his ingenious military machines in between designing costumes and scenery for pageants and masked balls. Whenever a dead body inconveniently appears in the garden or under a tower, Leonardo uses his astute powers of observation to discreetly solve the crime and save the Duke from embarrassment.

Leonardo’s sidekick in these sleuthing adventures is his young apprentice Dino. What Leonardo doesn’t know (or does he?) is that Dino is actually Delphina, a 16-year-old girl who ran away from home disguised as a boy to avoid an arranged marriage with a repulsive old man.

Portrait of a Lady opens with Leonardo and a troop of apprentices returning to the Sforza castle after shopping in town. As they approach the moat, they notice the body of a lady’s maid on the grass below a tower. During the first hours of the investigation, Leonardo finds the Devil card tucked in the woman’s bodice, and the other three cards that are still missing from the Visconti-Sforza deck (Tower, Knight of Coins and Three of Swords) laying on the floor near the window the woman fell or was pushed from. These cards become central clues, as well as bait to lure out the murderer.

Stuckart’s books show us downstairs life in a castle, with its daily grind of laundry, cooking, dog walking, sentry duty, and numerous other tasks that support the aristocratic lifestyle. We also get an insider’s look at the operations of a renaissance art studio, where numerous apprentices crank out portraits, wall frescoes, stage sets and banners for the aristocrats’ pleasure. The centerpiece of the book is a tarocchi-themed masked ball featuring a tableau devised by Leonardo with mechanical trump card figures. 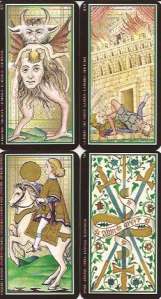 The author said in an interview that the plot was inspired by speculating on the fate of the four missing Visconti-Sforza cards. She’s done her research, so there’s nothing here to make a tarot historian cringe. I believe the tarot reading scenes in the book are historically plausible. There’s no documentary evidence for divination with tarot until the 18th century, but I find it very unlikely that no one in previous centuries ever saw the potential for fortunetelling with the cards. My only quibble is the scene where someone shuffles the gilded deck (it would have been way too thick and fragile), then reads the cards with spread positions, which seems anachronistic.

All three Leonardo da Vinci Mysteries are available on Amazon.

From Milan to New York: The Adventures of the Visconti-Sforza Tarot deck.

The four missing cards are from the mini Visconti Tarot published by Lo Scarabeo, 2004.