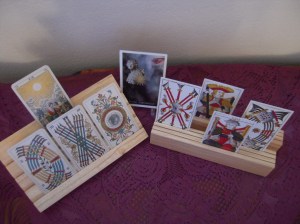 A comment on facebook inspired me to search for “playing card holders for the disabled”. The results gave me numerous alternatives to laying a spread flat on the table.

In the top photo, the Ancient Italian spread on the left sits on a flat board set at an angle with four grooves to hold cards. The Pierre Madenié cross spread is set up using two card holders with three grooves each.

When I get all suit cards in a spread, I often add up the sum and use the corresponding trump card as a general theme for the reading. With these card holders, I can put the theme card behind the rest of the spread to show that it’s background energy. I did this in the Ancient Italian spread above.

With different sized decks, like the Visconti-Sforza shown here, you can play around with emphasis. For instance, use a large card for the most important card of the spread, with smaller supporting cards either in front or back. 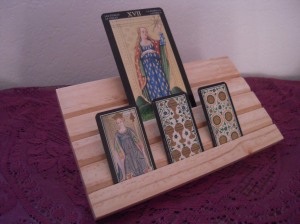 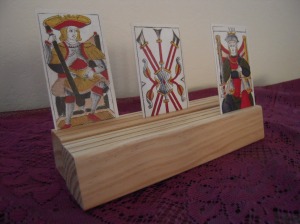 How about having the spatial arrangement of the cards reflect the intention of the spread? For this Past-Present-Future spread with the Madenié deck, the cards go from the past in the background to the future card displayed more prominently up front.

You could have a series of cards going from back to front showing what is hidden in the subconscious gradually emerging toward the front. I really like being able to leave a spread out for a few days without taking up a lot of space on the table. The spreads I want to spend time with sit upright in these holders, while my card of the day rests on a mini-easel.

What are your ideas for a three-dimensional arrangement of cards?

Addendum:  Great minds think alike. Just as I was putting the finishes touches on this article, I saw Michael M. Hughes’ instructions for making your own card holder out of card stock. It’s on his blog at Tarotbootcamp.com.