Osvaldo Menegazzi, the artistic genius behind Il Meneghello, has once again created a beautiful facsimile of an historic tarot deck. This deck, commissioned by the Duke of Milan, Filippo Maria Visconti, in the 1440s, is one of the oldest Italian tarocchi decks we know of. The cards were hand-painted on an embossed gold background, much like the Visconti-Sforza deck commissioned by Filippo’s son-in-law, Francesco Sforza, a decade later.

The deck has two names: Visconti di Modrone after the Italian family who owned the deck; and Cary-Yale after the American who bought the deck in the early twentieth century then donated it to Yale University.

We can’t know for sure how closely this deck conformed to the 78-card pattern that emerged later in the century since it isn’t a standard deck. Each suit has extra court cards arranged as three couples: King and Queen, male and female Knights, and Page and Maid. The three theological virtues, Faith, Hope and Charity are unique to this deck, either replacing three trump cards or serving as additional trumps. Since only 67 cards remain in the deck, some are obviously missing, but it’s difficult to say which ones.

The World is an exceptionally beautiful card. A knight on horseback in the foreground of an idealized landscape greets two monks arriving in a boat. The stylishly dressed Allegory of Fame floating overhead holds a crown and trumpet.

The Emperor and Empress are surrounded by four attendants standing at the four corners of their thrones. Death is harvesting five fully-realized people, not just generic heads and hands. His guts on the verge of spilling out are a macabre touch.

The pip cards are painted in blue and gold on silver leaf. The suit of batons is illustrated with arrows; but the court cards of this suit hold ceremonial batons with ornate finials. On the Ace of Swords, a hand emerges from a ruffled sleeve and grips the sword’s handle, exactly like the French Tarot de Marseille two hundred years later.

The figures on the court cards wear Visconti heraldry devices on their clothes. Francesco Sforza adopted all of these devices after marrying Filippo’s daughter and becoming duke himself. This complicates matters when you try to date the deck based on its heraldry.

Various historians have suggested dates from the 1420s to the 1460s for the deck’s creation. This is based on the heraldic devices, and speculation about the identity of the couple on the Lover’s card. I believe the deck was created in the mid-1440s by the artist Bonifacio Bembo for the Duke of Milan as a gift for his daughter Bianca.

Lombardy experienced an explosion of artistic activity in the 1440s. A small band of artists influenced each other to the extent that it’s sometimes difficult to tell which one created an unsigned work. The following artists were working in Lombardy in the 1440s, and most had commissions from Duke Filippo: the Zavatarri family, Pesellino, Bonifacio Bembo, Antonio Pisanello and Michelino da Besozzo. The deck is a product of this distinct Lombardy style, and has been attributed to each of these artists at one time or another. 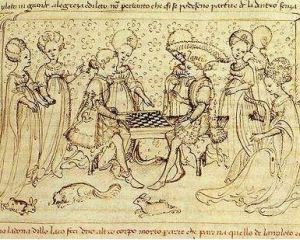 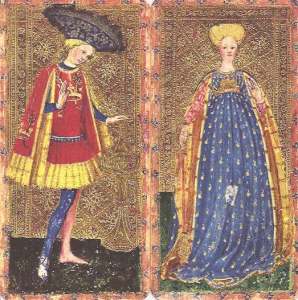 Considering the hair styles, head coverings and clothing, it’s obvious the deck could only have been created in the 1440s. The court card figures in this deck wear late-medieval robes that went out of fashion after 1450. The women’s elaborately plaited hair that often looks like a turban, and the men’s flaring hat are regional styles only seen in Lombardy in the 1440s. I don’t believe the court cards could have been created in any other time or place.

Most art historians agree that Bonifacio Bembo painted the deck. The court cards in this deck were undoubtedly drawn by the same hand that illustrated The Story of Lancelot (seen at left) for the Duke of Milan in 1446. That artist was Bembo.

What was the occasion for creating this deck? Various weddings have been proposed, but I suggest it might have been a birth. Bianca’s first son, Galeazzo Maria Sforza, was born in 1444. Galeazzo was Duke Filippo’s grandson and the future fifth Duke of Milan. I think the duke was so thrilled that his bloodline would continue, that he loaded the cards with Visconti heraldic devices to remind everyone that the new-born Galeazzo Sforza was half Visconti. The child’s father adopted most of these devices after Filippo’s death, emphasizing the continuity from the Visconti to the Sforza families.

The cards are 3.5 by 7.25 inches (the original size), and housed in a handmade box covered in marbled paper with the World card pasted on the cover. Details that stand out sharply when the cards are viewed online are somewhat muted by the matte paper. But there’s something magical about holding actual cards in your hands that you don’t experience staring at a computer screen.

The deck was printed in an edition of 400. It comes with a small booklet in Italian and poorly-translated English that discusses the deck and each trump card.

TarotWheel.net has a well-illustrated, detailed analysis of this deck. The author believes the deck was commissioned for Bianca and Francesco’s 1441 wedding. He links the trump cards with Petrarch’s poem I Trionfi, which was partly written at the Visconti court.

Arnell Ando maintains a website for Il Meneghello with a page dedicated to this deck.