Giordano Berti, who brought us the historically important Vergnano and Sola Busca decks, has done it again, producing a small print run of a virtually unknown deck. The Tarocchi Perrin, originally printed in Turin, is a delightfully unique deck that’s heavily influenced by Dellarocca’s soprafino design.

Perrin published richly illustrated non-fiction, especially history, in mid-19th century Turin. This venture into deck publishing was probably an experiment that didn’t work out, since the deck is unknown and doesn’t appear in histories or catalogs of playing cards.

This is probably one of the earliest decks to be produced using chromolithography. In this process, the design is applied to a flat stone or a zinc plate with a grease crayon. Color is applied with an oily paint and the paper is run through a press to transfer the color. A separate stone and separate pressing is required for each color. The process is time-consuming and laborious, but once the stones are prepared the image can be mass produced. In the 19th and early 20th centuries, this was the preferred method of making color prints until it was superseded by cheaper methods in the 1930s.

Unlike most TdMs, the subject of each card in the Perrin deck does not float in a void. The background settings and surrounding hatching create a context which brings the figures to life. The deck is just innovative enough to be delightful, but not so quirky as to seem strange. If you read with a TdM you’ll have little trouble adjusting to this deck.

Eleven trump cards are based directly on Dellarocca, while a few trumps are unique: The Fool is a carnival jester thumbing his nose. The Pope and Papesse have heavy draperies behind them and the Pope has no acolytes. The Bagatto is a cobbler as in Dellarocca’s design, but he holds a hammer instead of a wine glass and is in a fully realized workshop. The Hanged Man is suspended from one overhanging tree branch and has a landscape behind him. The Wheel of Fortune, Temperance, Star and World have details that are noticeably different. Although the deck was created in Piedmont, it has none of the details associated with the local tarot style, like the Fool’s butterfly and the Hermit’s rosary. Shown here are three Bagatti: Perrin, Dellarocca and Vergnano.

The pip cards follow the soprafino style with some differences. The foliage in the suits of coins and batons is more stylized and rendered in rich gold, amber and burnt orange. The cups are narrow like Dellarocca’s, but are brighter gold. The swords are entirely silver with minimal vegetation, giving them an austere feeling. 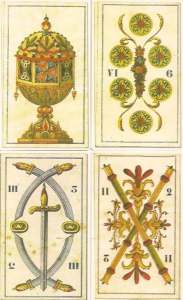 The court cards maintain the same postures as in Dellarocca’s deck, with a few exceptions. The Page of Coins has just pulled a coin out of an open chest, the Page of Batons strikes an arrogant pose with his baton held aloft, while the Queen of Swords looks pensive with her chin on her hand. The men’s striped pantaloons, the women’s tight bodices and the heavy robes give the cards a late Renaissance/Baroque feel.

The box was designed by Letizia Rivetti, who created the boxes for the Vergnano and Sola Busca decks. The box is made of very sturdy corrugated cardboard that opens like a book. Antique gold paper lines the inside cover, and the box is lined with red velvet. The exterior is covered with paper marbled in warm brown with large gold flecks. A card is pasted to the cover and the box closes with a satin ribbon.

The cards are the same size as the Vergnano deck, a bit under 4.5 x 2.75 inches. They have a smooth, silky feel and the corners are slightly rounded, making the cards very pleasant to handle and shuffle.

I have only two minor problems. The extraneous white border is a distraction, and the hatching and stippling blur details, especially in the faces; at least to my aging eyes. The enclosed booklet gives information on Perrin, and juxtaposes images of Perrin’s and Dellarocca’s trumps.

Berti has dropped tantalizing hints that he has access to more rare Piemontese decks. If you’re a collector who needs to narrow down your acquisitions (and I couldn’t possibly be referring to myself) consider focusing on Piemontese decks or decks related to Dellarocca’s designs.

The deck is in a very limited edition of 600 and is sure to sell out soon, as Berti’s other decks have.

Here are articles on the Dellarocca/soprafino style, and Tarot in Piedmont.

Leave a Reply to Marilyn from Tarot Clarity Cancel reply