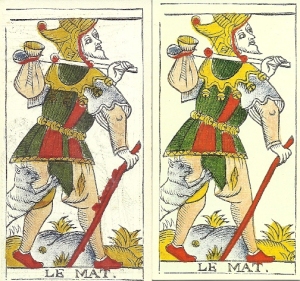 If you bought the first edition of the Pierre Madenié deck produced by Yves Reynaud in 2013, do you need to get the second edition as well? Yes, you probably do.

Even though it’s my number one reading deck, I initially felt a second copy was an unnecessary indulgence. Besides, I was afraid the newer, cleaned-up version might be too pristine. I prefer historical facsimiles that preserve the original intact; so I shudder at the thought of someone touching up historic cards to conform to their arbitrary criteria of perfection. But a fellow collector convinced me the second edition was even more beautiful than the first, so I succumbed to temptation. I’m very glad I did.

Right off the top, you can see Reynaud’s methods by comparing the two Fool cards. In the first edition, the Fool’s hair, collar and bells are dark mustard. In the second edition they are lighter yellow. The colors throughout the second edition are slightly brighter, making the black lines more visible. In comparison, the colors in the earlier deck seem heavy and muddy.

In the first edition, the green on the back of the Fool’s tunic is a stenciled rectangle that covers the gold bells and the edge of his collar. This has been corrected in the second edition. The blobs of red ink along the outside of the walking stick have been removed. But I’m happy to see that his red shoe still overlaps the card border.

A ghost image of the Lover’s card can be seen in the background of the first edition Fool. This is the “kiss” that happens when a ghostly image is transferred to another card during production. I happen to enjoy seeing these artifacts of the printing process. But if you think they’re a flaw, you’ll be happy to know they have all been removed in the second edition. The backgrounds are cleaner and are a very pleasant soft white.

Ink has been removed from places where it obviously doesn’t belong, like the lovers’ foreheads, and around the Grim Reaper and the Devil’s minions. Since the cups and coins are lighter gold, the ink that spills outside the figures is not as noticeable. For the most part, the cards have been left intact and have retained their original look and feel.

Overall, this deck has acquired freshness and clarity without losing any of its historical value. The backs and the card stock are identical to the first edition, and the differences between the two are very subtle. If you missed out on the first edition, don’t hesitate to get this one. Only 1500 have been printed, so it won’t be available for long.