From My Bookshelf: Sigismondo Malatesta and the Italian Renaissance 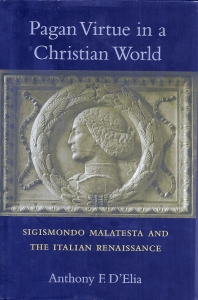 Sigismondo Malatesta, bad boy of the Renaissance, gave us our first documented evidence for tarot. Researcher Franco Pratesi discovered a note in a Florentine account book dated September 16, 1440 saying a deck of naibi a trionfi had been sent to Malatesta that was beautiful, expensive and decorated with his arms. In 1452 he surfaced again in connection with tarot. Bianca, the Duchess of Milan, sent a note to her husband Francesco saying Malatesta was asking for the trionfi cards that were made in Cremona.

I read this biography hoping to learn what Malatesta was doing when he purchased his decks, why he purchased them, and for what occasion. Instead of a detailed biography, the book immersed me in the humanist culture of fifteenth-century northern Italy. Malatesta was one of a small elite of successful professional soldiers (condottiere) who presided over luxurious courts in the city-states of northern Italy. These soldiers had an excellent humanist education and were connoisseurs of antiquities and classical literature. 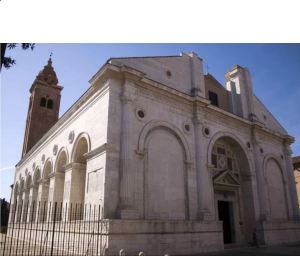 Sigismondo’s court in Rimini was a center for the revival of Greek classicism. He commissioned Latin translations of many Greek texts to give as gifts. The Tempio Malatestiana, designed by Leon Battista Alberti, is a pagan fantasy stuffed with images of the muses, planets, and Olympian gods, all carved in marble by Agostino di Duccio. Although the Tempio is wrapped around a Christian church and serves as the final resting place for Sigismondo, his third wife and his favorite humanists, there is not a bit of Christian imagery in it.

The book examines Malatesta’s life and deeds through the lens of two book-length poems written by his resident humanists, Hesperis and Isottaea. The poet Basinio saw himself as a new Homer, and Sigismondo fancied himself a Homeric hero who embodied the classic virtues, so their collaboration was blessed by the gods. The poems depict Sigismondo sacrificing bulls to Mars, praying to Jupiter, being given supernatural powers, shining in splendor like Apollo, and summoning the Olympian gods to protect Italy. He went further than anyone in assuming the persona of a classic hero, without an ounce of Christian guilt holding him back.

There’s no doubt that Malatesta was a larger-than-life personality. By all accounts he was a formidable soldier and military strategist who began his career at age 13 fighting under the command of Francesco Sforza, the greatest condottiere of the time. He was known for his immense vitality, strong libido and monstrous rages when thwarted.

Pope Pius had a personal, vitriolic loathing for Malatesta. In 1462 he gave Sigismondo the honor of being the only person to 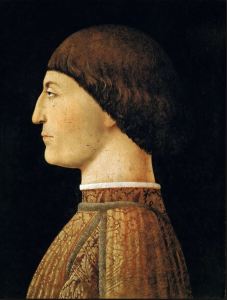 ever receive “reverse canonization” from a Pope, condemning him to the torments of hell while still alive. In a 17-page unhinged rant, the Pope accuses Malatesta of rape, murder, adultery, murdering his wife, being more animal than human, and of various perversions that probably say more about the Pope’s fantasy life than they do about Sigismondo’s deeds. Then the Pope takes gleeful and sadistic pleasure in describing the lurid torments Sigismondo will experience. Perhaps the Pope was on to something, because after this, Sigismondo seems to have lost his mojo. Except for some modest victories against the Turks, the rest of his life was a downhill slide until his death in 1468.

The book is a fascinating exploration of how lords of Italian city-states used classical imagery in poetry and sculpture to shape their public personas; and how they adopted the heroic virtues of classical antiquity as guides to conduct, even though these virtues were the antithesis of how a good Christian should behave.

Back to tarot: What can Sigismondo’s deck purchases tell us about tarot’s place in this world? Let’s start with a reality check. So much has been lost from that century, that the few decks and references we have probably loom larger than their actual importance at the time. Sigismondo may have purchased dozens of tarot decks, so there was nothing special about the two we know of. But it’s all we have to work with.

A beautiful and expensive deck was sent to Sigismondo on September 16, 1440. I’m guessing the deck was ordered three or four months earlier around May, 1440. His wife died in October, probably of the plague or childbirth. Did he order a deck of cards to keep his wife amused during her confinement, or as a gift when the baby was born? We can only speculate.

Throughout the early 1440s we have scattered references to purchases of both expensive and cheap tarot decks in Milan, Ferrara and Florence. By 1440, tarot was an easily obtained commodity and aristocrats were beginning to commission luxury versions. Sigismondo spent a lot of time in Florence in the late 1430s, as Cosimo de’Medici was a close friend. Did he first see tarot there, so he naturally turned to a Florentine middle-man when he wanted to obtain a custom deck? Milan and Cremona have always been credited as the center for luxury deck production because we know of three decks created in workshops in Cremona for the Viscontis and Sforzas of Milan. Perhaps there were many more Malatesta decks from Florence, but they haven’t survived, so tarot history has been skewed toward Milan.

In the 1430s, Malatesta fought in the Papal army under the command of Francesco Sforza, and Sforza probably mentored the young, promising condottiere. By the early 1400s, Malatesta and Sforza usually fought on opposite sides. But they had family bonds, since Malatesta married Francesco’s daughter Polisenna in 1441. 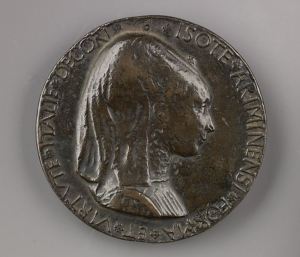 By 1452, Malatesta was at the peak of his fortunes and reputation. Alberti and Duccio were at work on his grandiose Tempio, while humanist poets were polishing his reputation as a classical hero favored by the gods. Polisenna was dead, leaving him free to live openly with the great love of his life, Isotta degli Atti, who became this third wife a few years later. In 1451 he signed a friendship pact with Francesco Sforza.

In 1452 he sent a note to Bianca Sforza asking her help in acquiring a tarot deck like the ones she was getting from Cremona. She passed the message on to Francesco. This might indicate that Cremona was known for a certain style of luxury tarot deck that was becoming popular. Cremona was part of Bianca’s dowry and she had many contacts there. Why didn’t she handle the request herself instead of asking her husband? Perhaps because all art products, even the most mundane, were tools for propaganda and for asserting a public persona. Maybe Bianca thought the Duke should be aware that another condottiere was using their favored style of deck for these purposes.

A biography of Bianca Sforza that gives a detailed account of the Sforza’s travels and visitors does not mention Malatesta. But it’s entirely possible he paid a social call at the castle and was shown the family’s golden decks. Or just as likely, he wanted to get in on a fad for Cremonese decks. 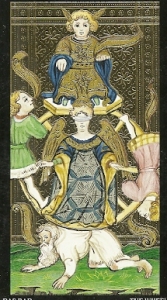 the Duke of Milan, then they strike an odd note in a court saturated with classical imagery. Decks like the gilded Visconti-Sforza, with their International Gothic look, seem to come from a different world. I believe the original tarot deck came from a different social strata, and expressed a different world view, than what you would find in a humanist court. What tarot looked like before it was taken up by the wealthy lords of Italy as a gilded status symbol is one of the great mysteries of tarot history.

Tempio Malatestiana, Rimini, Italy. Exterior by Leon Battista Alberti, interior marble carvings by Agostino di Duccio, frescos by Piero della Francesca. Seven archways on the left mark the tombs of seven humanists, including the Byzantine Platonist Plethon. Sigismondo was such a fan, he dug up the philosopher’s bones and transferred them to Rimini. The Tempio was supposed to have a dome based on Brunelleschi’s design, but Sigismondo ran out of money and luck before it could be constructed.

Piero della Francesca, portrait of Sigismondo Malatesta, oil and tempera on panel, @1452. Now in the Louvre.

Matteo de’ Pasti, bronze portrait medallion of Isotta degli Atti. De’ Pasti did two medallions of Isotta. This earlier one shows her with long hair and looking girlish. The other shows a mature Isotta with an elaborate headdress. Many copies were struck, as Sigismondo liked to bury portrait medallions in the walls and foundations of his buildings. 1446 is the date the two lovers commemorated as the start of their relationship. Inscriptions that were more public often say 1450 to avoid flaunting their adultery, since Sigismondo’s second wife didn’t die until 1449.

Visconti Sforza tarot card, the Wheel of Fortune, @1451. Probably by Bonifacio Bembo, although the Zavattari brothers still have their champions.