Comparing Visconti Sforza Replacement Cards: The Devil’s in the Details

If you can only own one or two Visconti Sforza decks, before purchasing you need to familiarize yourself with the replacement cards – Tower, Devil and Knight of Coins. (The Three of Swords is also replaced, but it’s hard to mess that one up.)

There are at least eleven versions of the Pierpont Morgan Bergamo Visconti Sforza Tarocchi (to use its official name) by six different publishers. It comes in two basic flavors: a photo-reproduction of the cards as they exist now with chipped paint, flaking gold and nail holes top center; or a restored version that’s been touched up to look like new. Some decks are the original size (3.5 x 7 inches), while some are smaller. The images in all decks are identical except the four lost cards. Every publisher hires an artist to create replacements, which vary greatly and can make or break a deck.

I want to see replacement cards that look like they belong in an International Gothic deck from about 1450. I don’t want to see a Devil and Tower patterned on the Tarot de Marseille which emerged over 200 years later. There is no precedent in early Italian decks for a devil on a dais with two minions, or people falling from a tower. The four court figures in each suit wear robes with the same fabric. The clothing in the suit of Coins has interlocking six-sided rings forming a dark blue honeycomb on a gray-blue background. There’s no excuse for a Knight of Coins dressed differently than the others in his suit; yet only two decks manage to come close to getting it right.

I’ve scanned the Devil and Tower from six decks in my collection and arranged them in order from my most to least favorite. I’ll discuss them in that order, and give a critique of the Knight of Coins. 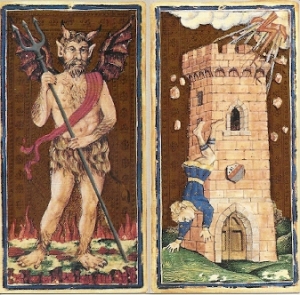 Il Meneghello produced an original size deck in 1996 and an identical smaller deck (2.25 x 4.5 inches) in 2002. The replacement cards by Giovanni Scarsato look like they belong in a late medieval deck. The Devil has an extra set of ass’s ears, bat wings and a furry skirt, all common attributes of a medieval devil. The Tower resembles other early cards except for the anachronistic falling person. The Knight of Coins is dressed in plain blue fabric, and unique to this deck, he’s wearing armor. Extra points for having the best horse of any deck.

Lo Scarabeo has produced more versions of this deck than any other publisher. The best is their gold foil deck from 1995 that measures 2.3 x 4.5 inches and is printed with foil incised to resemble the original embossing. Atanas A. Atanassov did the restoration and the replacement cards. These cards glitter and shine like the originals, but unfortunately the scans come out dark bronze. The Devil and Tower were modeled on the Rothschild sheet, one of the earliest examples of Italian decks, so it gets high marks for historical accuracy. Inexplicably, the Knight of Coins is dressed in the same gold fabric as the cups court cards. Lo Scarabeo produces a mini deck (1.75 x 3.25 inches) with the same replacement cards but without the gold foil.

Around 2002 Lo Scarabeo printed another version without the gold foil and with different replacement cards which I believe closely resemble the Tarot de Marseille (I don’t have the deck in front of me to be certain). 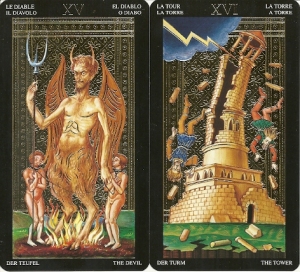 The third set of illustrations is another Lo Scarabeo gold foil deck. The 22 Grand Trumps is 3.0 x 5.5 inches, not quite as large as the original. There’s no indication who the artist is, but it might be Atanassov. The replacement cards are modeled on the Tarot de Marseille, and although the artist has attempted to give them a medieval look, it just doesn’t come off.

In 1975 both Dal Negro and US Games/Grafica Gutenberg printed identical photo-reproduction decks in their original size. The Devil and Tower blend nicely with the rest of the deck but 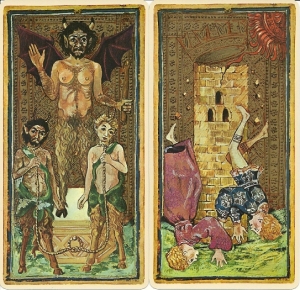 unfortunately are closely modeled on the Tarot de Marseille. The Knight of Coins was created by flipping the Knight of Cups so he faces the other direction, then substituting a coin for the cup, so the Knight is dressed like the cups suit rather than the suit he belongs to.

The Golden Tarot published by Race Point, with a book written by Mary Packard, is slightly smaller than original (3.25 x 6.5 inches) and is restored. Both replacement cards are heavy on the red-orange, patterned on the Tarot de Marseille, and look totally out of place in a medieval deck. The Knight’s cloak has the interlocking ring pattern, but the background is

gold instead of blue-gray.

US Games/AG Muller reprinted the 1975 photo-reproduction deck in 1984, 2007 and 2015. All three printings have this same lurid, cringe-worthy replacement cards by Luigi Scapini. But the Knight of Coins is the most historically correct since his cloak has the correct pattern and colors, although a bit too bright.

Monumenta Longobardia printed the earliest reproduction in 1974. The replacement cards are line d

rawings based closely on the Tarot de Marseille. Only 500 copies were printed.

In 2012, Alice Cooper expressed her love for this deck by painting a faithful copy with replacement cards based on the Tarot de Marseille. She printed 200 copies that sell on Etsy.

Here’s my opinion in a nutshell:

Links to other articles on the Visconti Sforza deck: