With this latest issue The Cartomancer is transitioning to its new owner/editor Arwen Lynch-Poe. I’m very happy to see that the magazine is just as beautiful as ever, stuffed full with tarot art printed in luscious colors. The articles are on a wide range of topics, so there’s something for everyone. Here are a few of my favorites:

As one of the privileged few who owns the very first limited edition of The Tarot of the Crone by Ellen Lorenzi-Prince, I was excited to read an interview where she talks about the genesis of the deck.

An exciting new feature is “Experts Roundtable.” In each issue, several prominent members of the tarot community will give their insights into a topic. This time several tarot professionals, including Mary Greer and Benebell Wen, talk about how they approach learning a brand new deck. 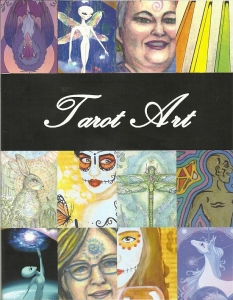 This non-artist has always fantasized about creating her own deck. S. Johanna Hill gives step-by-step instructions, which even a klutz like me can follow, for creating your own deck out of postcards.

Wayne Limberger discovered tarot the same year I did – 1972; his first deck was the same as mine—the Aquarian Tarot by Palladini; and we’re at the same stage in life—retired curmudgeons.  After bemoaning how superficial and commercial the tarot scene has become in recent decades, he cautions wannabe readers that it’s nearly impossible to make a living with the cards. If you’ve been wondering what to charge for a reading, he’s asked around and gives his feeling for the going rate these days.

Other articles in this issue cover various approaches to tarot such as counseling, pathworking, and storytelling.

Last but not least, there’s an article from the resident history nerd (me) on how Major Arcana II and V have changed over the centuries.

The Cartomancer is essential reading if you want to keep up with the latest in the tarot scene.

Get it here at TheCartomancer.com

Tags: The Cartomancer, The Cartomancer magazine, The Cartomancer Quarterly
From: Tarot and Art, Tarot Books
← The Tarocchino Bolognese of Giuseppe Mitelli Published by Giordano Berti
The Bones You Have Cast Down – A Novel by Jean Huets →
4 Comments Post a comment