The Bones You Have Cast Down – A Novel by Jean Huets

Hop on a magic carpet and let Jean Huets fly you back to 1447, when a war between Milan and Venice had northern Italy in turmoil, the Sforzas were still a few years away from ruling Milan, and tarot was a novelty.

The book opens when Bianca Sforza hires our heroine, Taria, as her lady’s maid. We’re immediately immersed in a servant’s world — on the fringes of wealth and opulence but with very little personal autonomy, way too much petty gossiping and backbiting; and where friendships and alliances determine your safety and status. Taria is fortunate to have the painter Bonifacio Bembo and his sister as allies, and to have an admirer, a young page named Micchele.

Things get interesting and magical when Taria is given a drawing of Sister Manfreda as the Papessa in the Visconti-Sforza tarot deck. The drawing helps her time travel back to 1298 to visit a small group who revere the charismatic Sister Manfreda (or Maifreda, as she’s called in the book) as the spirit of a renewed Church. 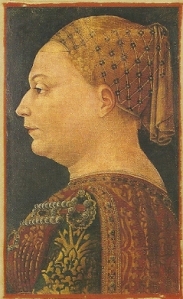 knowledge of Sister Maifreda will be erased. Even her distant relative, Bianca, will be unaware of her existence. Taria is charged with summoning all her courage to serve as a link between the two times. Her task is to ensure that the Inquisition in 1298 will record proof of Maifreda’s existence, then bring this to Bianca’s attention in 1448 so Maifreda will once again receive the reverence she deserves.

As the editor of Stuart Kaplan’s Encyclopedia of Tarot, Jean Huets is an expert in 15th century history and tarot. Vivid details of food, dress, court etiquette and stomach-turning trips by wooden cart in freezing weather immerse us in the times. This is the kind of book I love: solid history with a touch of magic. After reading this book you will never see the Visconti-Sforza deck the same way.