J-P Payen and the Tarot de Marseille Type I 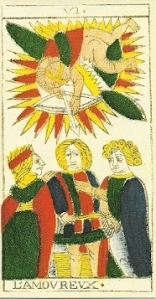 Yves Reynaud has produced facsimiles of historically important decks like the Madenié, Burdel and Conver. Now he’s done it again with a recreation of the 1713 Jean-Pierre Payen Tarot, one of the few Tarot de Marseille Type I decks available to purchase. If you’re familiar with any of Reynaud’s decks, the Payen is the same high-quality, limited-edition production housed in a sturdy box. Let’s put this deck in context with the Tarot de Marseille tradition.

What’s a TdM I Tarot?

TdM type II is the deck we think of when someone mentions the Tarot de Marseille. It’s the standard French TdM first printed by Madenié, Chosson and Conver in the 18th century. Grimaud, Lo Scarabeo, Fournier other major European card publishers currently print their own versions. Most modern reproductions, like Pablo Robledo’s Tarot de Marseille, the CBD by Yoav Ben Dov, and the Jodorowsky Camoin deck are TdM Type II.

The TdM Type I is identical to the Type II but with ten minor differences. Historians used to think the TdM I was an earlier version of Tarot which the TdM II evolved from. Recently we’ve discovered that the Madenié deck of 1709 is earlier than the two oldest TdM I decks we know of, the 1710 Dodal and the 1713 Payen. It seems the two types are parallel traditions. The TdM I’s distinct imagery was used from the 17th to 19th centuries in decks from many regions.

This Page shows the ten unique TdM I cards next to the comparable TdM II cards. If you aren’t familiar with the differences, I suggest you take a look now before reading on.

Origins of TdM I imagery 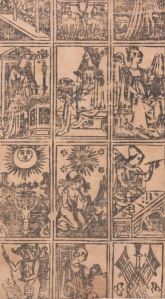 The first evidence we have of the distinctive TdM I style is the Cary Sheet housed in the Beinecke Library of Yale University. This fragment contains 6 complete and 14 partial cards. It was probably printed in Milan about 1500, but there’s no solid proof.

Shown here is the section of the sheet with the most complete cards. A few images are like the standard TdM II, but some are distinctive, like the Devil spearing a child. A few cards have TdM I imagery: the Moon facing forward and the blank shield on the Chariot. The Pope has a bishop’s crook, not the triple cross of the TdM Type II, and not the bulb and folded top of the TdM Type I. This deck is too unique to call it a prototype of either the TdM I or II. But it shows that some TdM I imagery existed in the early 1500s.

In the early 20th century, when a well at the Sforza castle in Milan was cleaned out, they discovered fifty-eight cards from numerous decks dating from the early- to mid-16th century at the bottom. One card was the distinctive TdM I World with her leafy belt and uncrossed legs.

It seems Italian decks displayed the distinctive TdM I details very early in tarot’s history, and they travelled to France at the same time as the traditional TdM II.

The first complete deck we know of with TdM I imagery was printed in Paris in 1659 by Jean Noblet. This deck has seven out of the ten TdM I details. Exceptions are the Emperor, who doesn’t have the 4 in front of his face, and the Chariot which has the card maker’s initials on the shield. The Noblet Pope has a bishop’s crook like the Cary Sheet. For the most part, the rest of the trump cards conform to the standard TdM II pattern. 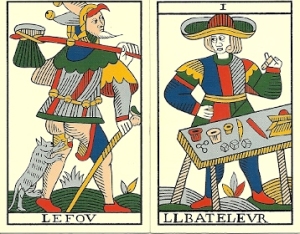 The Noblet Fool is unique – this is the only deck where he’s called Le Fou rather than Le Fol or Le Mat. Paired with the Bateleur and his truncated wand, it seems Le Bateleur is holding the Fool’s penis which the dog is about to bite off.

This deck is close to being a standard TdM type I, but not entirely. Two versions, by Jean-Claude Flornoy and Joseph H. Peterson, are currently available.

The Rolichon deck from mid-1600s Lyon only exists as a drawing in a book printed in1919. It’s very similar to the Dodal deck from a half-century later and may show us what the standard tarot deck looked like before the TdM II became standard. Or perhaps the Rolichon-Dodal style deck was a parallel tradition that was swamped by the TdM II thanks to economic and marketing trends, just as the Waite Smith deck edged out any other style of deck in the USA by the mid-20th century.

A deck printed by Jean Dodal shortly after 1700 in Lyon is is the earliest deck that has all the significators of a TdM Type I. 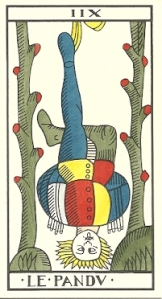 It’s a near contemporary of the first known TdM Type II by Pierre Madenié in 1709, and is nearly identical to the Payen Type I deck. Jean-Claude Flornoy produced a reconstructed deck, and a version printed by Dusserre is out of print and rare.

Jean-Pierre Payen’s deck printed in Avignon, 1713, is so similar to the Dodal it may have been directly influenced by it. Yves Reynaud has produced the only version of the Payen deck on the market.

TdM I details often appear in decks that deviate from the standard TdM II pattern.

Besançon-style decks with Juno and Jupiter instead of the Papesse and Pope were printed in Besançon, Strasbourg, and Switzerland from about 1720 to the early 1800s. Five cards conform to the TdM I pattern: Le Fol, the Lovers, the Chariot’s scalloped canopy, the World, and the Knight as Chevalier. 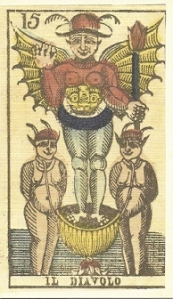 The distinctive Piedmont style has elements of the TdM I. The Pope has a bulb and flower on his staff instead of the triple cross. Cupid flies in from the right on the Lovers card, but he’s not blindfolded. The chariot has a scalloped canopy, and the Devil is a TdM I type with a face in his belly.

Decks with TdM I details were printed from Paris to Piedmont over three centuries. This style has infiltrated numerous decks in many times and places, and is a nearly forgotten alternative to the ubiquitous TdM II. Thanks to Jean-Claude Flornoy, Giordano Berti and Yves Reynaud the TdM Type I deck is now available for everyone.

Decks shown in this article