The Deck and Book of the Deification of Sixteen Heroes 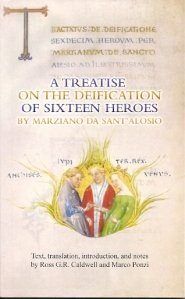 The legendary “da Tortona” deck, grandfather of all tarocchi/tarot decks, is now accessible thanks to a small but incredibly rich book by Ross G. Caldwell and Marco Ponzi; and a recreated deck by Robert Place, The Marziano Tarot.

About 1420, the Duke of Milan, Filippo Maria Visconti, asked his secretary and advisor, commonly known as Marziano da Tortona, to invent a card game. Marziano created the Game of Sixteen Deified Heroes, a deck of cards with four suits numbered ace to ten and an extra suit of illustrated cards – the same format as the game of trionfi/tarocchi/tarot invented about 15 years later. 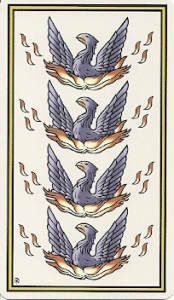 The four suits are types of birds: eagle, phoenix, dove and turtledove, with just one court card, a king. Four cards of classical deities and heroes like Juno, Apollo and Hercules are appended to each suit, totaling 16 extra cards. Marziano wrote a book of stories and moral lessons based on each of the sixteen figures, with descriptions to guide the artist in creating the actual deck. This is one model for how the game of trionfi was invented – a courtier devising an allegorical card game to amuse his aristocratic patron.

The duke hired Michelino da Besozzo to create the most beautiful and luxurious deck anyone had ever seen. Da Besozzo was the greatest International Gothic painter and manuscript illuminator in Lombardy at that time. A few decades later, the duke commissioned the best artists of his time, possibly da Besozzo again, to paint what is known as the Brambilla and Modrone tarocchi decks. The deck of sixteen heroes was probably in the same style as these later decks.

The heart of Caldwell and Ponzi’s book, A Treatise on the Deification of Sixteen Heroes, is Marziano’s original Latin text with a translation on the opposite page. The text shows how a typical, early 15th-century humanist understood his classical heritage, and the thinking that went into an allegorical game.

This book contains more gems than just a reprint of da Tortona. I was delighted to see the deck’s creator rescued from obscurity and his correct name restored. Da Tortona has been used for decades as a tag to identify the deck; but the secretary called himself Marziano da Sant’Alosio, for the town near Tortona where his father was the local lord. Caldwell and Ponzi have ferreted out what little biographical information there is, and even reprinted Marziano’s funeral oration. He couldn’t have had an easy life, flattering and catering to a perverted, sadistic madman. But to his credit, he survived with his reputation and his hide intact. 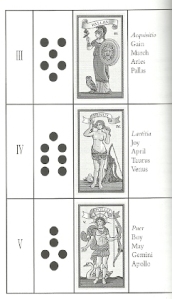 As a special bonus, there’s a chapter on divination with the deck based on attributing the 16 geomantic figures to the 16 classical heroes. These attributions are made using astrology and mythology appropriate to the late medieval milieu of the deck. We’re taught an ingenious system for creating a geomantic figure with cards, then deriving one of the sixteen heroes from the figure. We’re also given divinatory meanings for the forty pip cards, so the deck could be read using your favorite tarot techniques.

Of course, you need a deck to try out the system. Robert Place has filled the demand by using Marziano’s card descriptions to recreate the deck. The original deck was in the late medieval International Gothic style, lavishly embellished with gold and silver leaf like later decks commissioned by the Visconti duke. What if someone had made a wood block version for popular consumption? Place has imagined what this deck might look like and has given it a humanist flair. 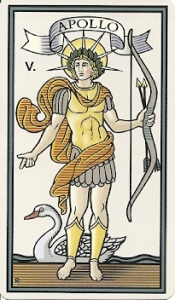 The deck was last heard of in 1449 when it was sent to Isabella, the Duchess of Lorraine and former Queen of Naples and Sicily. I’m very intrigued by the reprint of the cover letter that accompanied the deck. Three men were involved, one of whom went to great pains to track down the deck and book. Who were these men? Why were they so strongly motivated to send a lavish gift to a has-been queen living in seclusion in France? Why were they hanging around a military camp during one of the worst years in that time of non-stop warfare? Where was the deck and why was it so difficult to find? How did it get lost again? Further down, I read between the lines of the letter to fill in historic details and add speculations of my own.

Get the book at Lulu.com
http://www.lulu.com/spotlight/scholion?fbclid=IwAR1GgIUdA8OLmR8OG0qlekrSBqJ0dRWtQyKPmaddYix8cKfA1NrieRRdo8Y

Get the deck at  https://robertmplacetarot.com/  and be sure to check out the rest of the website while you’re there.

The Deck of Sixteen Deified Heroes Goes to France 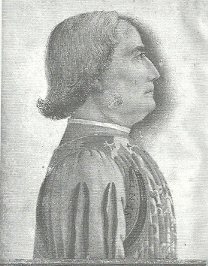 In November 1449, Jacopo Antonio Marcello sent the deck in question, along with a block printed trionfi deck, to Isabella, former Queen of Naples and Sicily, accompanied by a cover letter that’s reprinted in Caldwell and Ponzi’s book. In his letter, Marcello tries to impress on Isabella just how much trouble he suffered locating such a magnificent gift.

Queen Isabella was the only child and heir of the Duke of Lorraine. In 1431, she married René of Anjou who inherited the kingdom of Sicily/Naples and ruled it from 1435 to 1442, when he lost the throne to Alfonso of Aragon. Isabella left Naples and returned to Lorraine in 1440. She retired to her country estate in 1445, leaving Lorraine’s administration to her son, John of Calabria. She died in 1453.

Marcello wrote his letter to the ex-queen from Francesco Sforza’s military headquarters at Monselice, below Padua. Marcello says he’s in charge of the troops “of our most brilliant republic” (Venice) which were sent as reinforcements “while together we were waging war against Milan”. For most of 1449, Sforza and Venice were allied in a struggle against the Ambrosian Republic of Milan. Marcello was Venice’s representative and spy in Sforza’s headquarters, making sure the condottierro did Venice’s bidding.  But in September of that year, Venice betrayed Sforza and signed a separate treaty with Milan.

In November, when this letter was written, Sforza and Venice were bitter enemies. I don’t see how a Venetian could still be in Sforza’s headquarters, unless it was due to the friendship between Sforza and Marcello. Sforza controlled the countryside around Milan and was in the process of successfully starving the city. At the same time, the Venetian army, led by Sigismondo Malatesta, was pushing towards Sforza’s territory from the northeast. 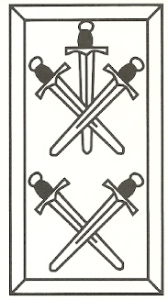 Marcello tells the queen that a friend, Scipio Caraffa, had just arrived from Provence. During a conversation, Marcello showed him a deck of trionfi cards that he had recently received as a gift. Evidently, trionfi decks were still new and exotic, since Caraffa had never seen one before and thinks it would make a splendid gift for Isabella. It must have been a plain woodblock deck, because Marcello said he spent some time looking for a “highly skilled artisan” to make improvements to the deck.  At that time, it was customary to purchase an uncolored deck then take it to your own artist to have it painted, and even gilded, if that was within your budget.

Marcello couldn’t find an artist to his liking, and he didn’t think the plain deck was good enough for someone of Isabella’s exalted rank. So he decided to track down the “new and exquisite sort of triumphs” that Filippo Maria Visconti was said to have had created.

Assuming that Caraffa made his trip from Provence to Italy in spring or early summer, Marcello probably spent the summer of 1449 tracking down the deck. By this time, the ducal palace in Milan, and its surrounding neighborhood, had been looted and was a total shambles. The Duke’s possessions were scattered or destroyed, and the citizens of Milan were prostrate with starvation. Marcello says he found the deck by pure luck with the help of the “enemy”, possibly someone within the Ambrosian Republic. That must have been tricky, since by this time Milan was devolving into a state of violent anarchy with mass executions of the upper class. 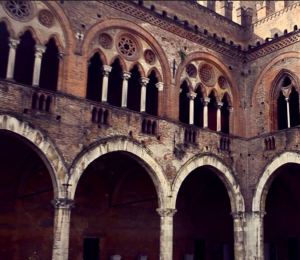 But I think Duke Filippo probably kept his deck at his primary residence, the castle at Pavia, which I don’t believe was looted.

When Milan made itself the Ambrosian Republic the very night the Visconti duke died, Pavia declared its independence; then a year later put itself under the protection of Sforza and made him Count of Pavia. Il Bolognino, a loyal friend of Sforza, was in charge of the castle; and Sforza’s mother-in-law, a former mistress of Duke Filippo, was in residence. During the last miserable months, when Milan was caving in, Sforza’s wife Bianca, daughter of the duke and his mistress, along with numerous relatives, occupied the castle. Perhaps someone took advantage of the confusion immediately after Filippo’s death to make off with the deck. Marcello must have circulated the word that he was interested in purchasing it. Since the deck was known and talked about, it would have been difficult to fence. The thief was probably happy to unload his stolen merchandise at a bargain price.

Marcello gave Marziano’s deck, along with his more humble trionfi deck, to Giovanni Cossa to deliver to Isabella. Marcello, Caraffa and Cossa were friends of Francesco Sforza and life-long supporters of the house of Anjou. They had hitched their wagons to the Anjou star and it would be in their interest to see René of Anjou returned to the throne of Naples. The men shuttled back and forth between France and Italy carrying messages, spying, counter-spying, and intriguing to topple Alfonso from the throne and reinstate René. The gift was probably meant to ingratiate them with Isabella, who would hopefully remember them once she and her husband were reinstated on the throne — which didn’t come close to happening.

But things turned out well for the three men. Cossa, who was a nephew and heir of one of the anti-popes, John XXIII, had a distinguished career as a French diplomat and died with a string of impressive titles after his name. Marcello stayed in the Monselice area, served a term as Podestà of Padua and was a respected patron of the arts. Caraffa enjoyed a successful career as a Venetian ambassador.

Let’s assume the deck actually arrived at Isabella’s residence. What could have happened to it? She died three years later and her son, John of Calabria (1426 -1470), who was her only heir, presumably inherited all her stuff. John spent the 1460s in Italy waging futile wars to retake the throne of Naples. In 1470 he went to Spain to press his claim to the Spanish throne and was poisoned there. He had five legitimate and numerous illegitimate children. Did one of them take the deck? Or a light-fingered servant or courtier? Whoever possessed the deck possibly didn’t take the book because they were only interested in the deck as a valuable object to sell or pawn.

We are very fortunate that Marziano’s book has been preserved in Paris. This book gives us a larger context for the development of allegorical card games and the creation of the ancestor of tarot. I’m grateful to Caldwell and Ponzi for making this slice of early renaissance history accessible to English-speaking readers, and to Franco Pratesi who did the original research.

Ady, Cecilia. A History of Milan Under the Sforza. Reprinted by Forgotten Books, 2012.
Originally published in New York and London, 1907.