I Tarocchi Rosenwald by Marco Benedetti

There’s something compelling about the Rosenwald deck. It’s enough like the Tarot de Marseille to feel comfortable; yet its quirky details give it a slightly exotic tone. For a transcendent experience, hold Benedetti’s gold and silver Rosenwald cards in your hands. 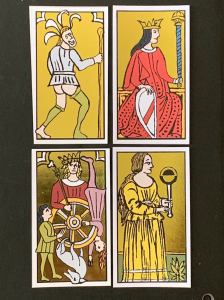 Benedetti worked from high resolution scans of the original uncut sheets held in the Rosenwald Collection in the National Gallery in Washington, D.C. He filled in broken lines, restored parts of cards that were obliterated, and created a Fool. Many historians believe the Bagatto, wearing a jester’s hat with ass’s ears, is a combination Fool and Bagatto.  Benedetti disagrees, so he created a Fool card based on a Florentine print of a beggar from the same time period as the deck. Then he added elegant colors and printed the deck with gold and silver foil.

Why the Rosenwald deck is important

We have very little evidence for the tarot cards ordinary people played with in the 15th century. Only two decks from that century survive because they were never cut up into individual cards. The sheets of uncut cards were used as filler in book bindings preserved in archives, so they didn’t incur same fate as most playing cards – used up and tossed in the fire.

Benedetti is offering three versions of the deck: a standard size print-on-demand deck and two custom printed decks in the original size, 2 x 3.5 inches. A court card from each deck is  shown here.

The box is solid wood and custom made for the deck. The box for the white deck is covered with white paper printed in black with the Bagatto printed on the cover. The envelope is very sturdy, printed in black on smooth green paper that’s a pleasure to handle.

This is not a limited-edition print run. Your deck is printed especially for you. The box is customized with your name and the number of the printing.

To arrange for a custom-printed deck email Tarot@MarcoBenedetti.it.

Get a print-on-demand deck with a white background at The Gamecrafter:
https://www.thegamecrafter.com/games/rosenwald-tarot-completed-by-marco-benedetti?dept_uri=tarot&dept_name=Tarot

Benedetti has created two other decks printed in gold foil which are reviewed on this site:

Benedetti Tarocchi based on the Visconti-Sforza tarot

Sullivan Hismans at Tarot Sheet Revival has done historic recreations of the only two block printed 15th century decks that survive: the Budapest and the Rosenwald. 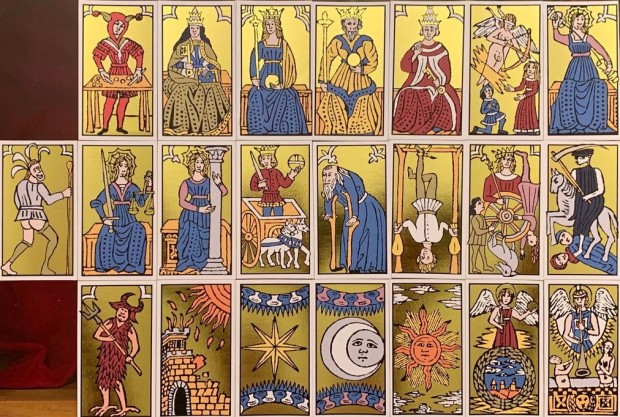