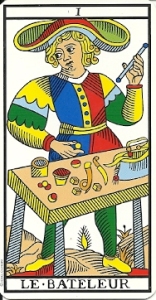 I’ve been watching Alejandro Jodorowski read cards on Youtube. He has a unique method of picking the cards for his three-card line. I’ve described it below and demonstrate with two readings. You’ll need two sets of trump cards to try his method. He uses two identical sets of trumps from the TdM he created with Philippe Camoin. I see this as a chance to use a variety of trumps-only decks that rarely come off the shelf and are too precious to shuffle.

You will also need a method for randomly generating three numbers from 1 to 22. Jodorowsky asks his clients to give him three random numbers. But if the querant knows about tarot, they’ll be tempted to give you the numbers of the cards that will give the best outcome. There’s probably a way of doing this with dice, or a random number generating app, but I put 22 little squares of paper in a bag with the numbers on them. To select my numbers, I shake up the bag, dump the papers out on my spread cloth, and the three that fall closest to me are used to pull my cards, in the order that the numbers fall on the cloth.

Here’s a sample reading to demonstrate this method.

My question: how should I focus my deck purchases?  Should I buy whatever grabs my attention? Only decks I will probably read with? Or save my money for something really spectacular? 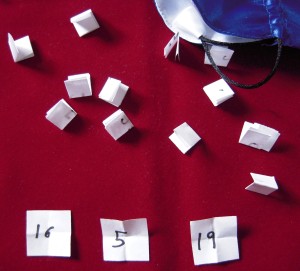 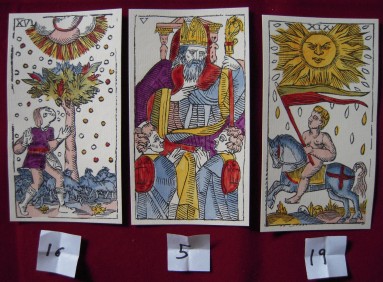 First step: When I dumped out the bag, these numbers were lined up close to me: 16 – 5 – 19. Using Sullivan Hismans’ hand painted Jacques Vievil trumps, I picked out the cards with the corresponding numbers: from left to right: Tower, Pope, Sun.

The Tower/Foudre shows me bombarded with so many decks to see and buy online.  On the other side, I’m in the Sun card galloping off to Paypal waving my credit card. The two side cards blend together in the center. The storm clouds and the sun become the Pope, a towering authority figure. The figures on the side cards realize they are out of control and they’ve come to beg the Pope for advice.

The second step is to get a commentary on the first line of cards. I shuffled the golden Oswald Wirth deck produced by Marco Benedetti. Then I counted down from the top of the deck, put the 5th card over the Pope, then kept counting and put the 16th and 19th cards in their positions. 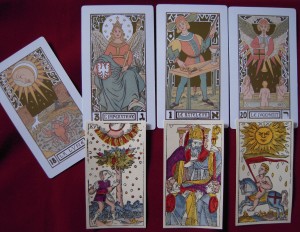 The Empress is saying that all those purchasing opportunities bombarding me demonstrate the abundance of the universe. The sheep are my existing deck collection. I should enjoy what I have and regard spending money on decks as sharing my abundance with the deck creators.

A Trickster comments on the Pope. He’s pointing to the coin on his table saying “don’t trust that old guy with the beard when it comes to financial advice.”  The two weird effigies on the posts behind the Pope show he has his shadow side.

Judgment: the blond guy in the center with his back to us is the same guy on the horse. Before I gallop off wielding my credit card, I need a shift to a higher perspective in order to make better choices.

I didn’t get a clear answer, so I used the Wirth deck that I just shuffled to pull a card for final advice. The Moon – yikes!! I’m really not seeing things objectively and should just chill out for now.

Here’s another reading where I reversed the steps and put cards from the shuffled deck in the first row.

Question: I’m a housekeeper for seven men who work in the mines and live far out in the woods. They aren’t too difficult to work for. They’re mostly happy, although one is kind of dopey. But it’s very lonely. I can’t have friends over because I’m hiding out in fear for my life (complicated story). An old woman has been coming around every day acting friendly and offering me apples to eat. She seems nice enough, and I would love to invite her in, but I’ve been warned not to talk to anyone. What should I do? 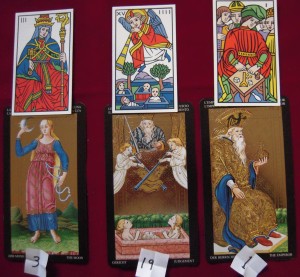 The toss from the bag got me 3 – 19 – 1. This time I shuffled Lo Scarabeo’s oversized gold foil Visconti-Sforza trumps, counted down to the 1st, 3rd and 19th cards and put them in their proper positions to make the first line. Then I drew cards with the corresponding numbers from Robert Place’s hand painted Budapest trumps. Dilemma! The Budapest trumps are not numbered the same as conventional decks. Do I pretend they have the same numbers as the TdM, or do I honor their historic reality and use the numbers printed on the cards? I could have gone either way.  But when I saw that using the numbers on the cards would get me Judgment twice in the center, I decided that was the way to go. In this deck the Papesse is #3, ranked above the secular Empress.

Interpretation: According to the cards on the left, the old crone is more than she seems. She’s mysterious and powerful. There’s magic here. On the right, an old person holds an apple out for you; but the card above warns there’s trickery afoot. There is more going on here than you realize, so you are advised to be very cautious. Double Judgment in the center! This situation has the potential for a profound death and rebirth experience. If you let this old woman into your life, you will never be the same. You could be destroyed, or your life could open into dimensions you can’t imagine. Are you ready to take that risk?

I’d love to hear what you see in these cards. Or use this method yourself and let us know in the comments how it went.

Search for Jodorowsky Tarot on Youtube for videos of his readings in Spanish with English subtitles.