Origins of the Minor Arcana by Ben Hoshour

This beautifully illustrated book delves into a neglected aspect of Tarot history. Historians usually skim over the suit cards (minor arcana) in their rush to the juicier trumps. This book gives the pip cards their due. After all, the four suits comprise 65% of the deck and predate the twenty-two trumps by centuries. Tarot as we know it could not exist without them.

Before immersing us in playing cards, the book offers a global perspective with a discussion of homo sapiens as a symbol-creating, game-playing creature. Since games with formal rules have been played since the Paleolithic, we’re treated to a tour of ancient symbol making techniques: Stone age cave paintings, Neolithic record keeping tokens, and the development of writing on clay, papyrus, wax and parchment. Photos from ancient cultures around the globe enhance this section of the book.

The similarity between Chinese Money Cards and Tarot is intriguing. The Chinese played a trick-taking game with this four-suited deck, possibly since the seventh century. But these cards were not the direct ancestor of our Tarot deck. Playing cards had to make a centuries-long odyssey down the Silk Road from China to Persia, then on to Mughal India and Mamluk Egypt, experiencing many changes in design and deck structure before entering Europe in the fourteenth century. The book follows this trail, demonstrating 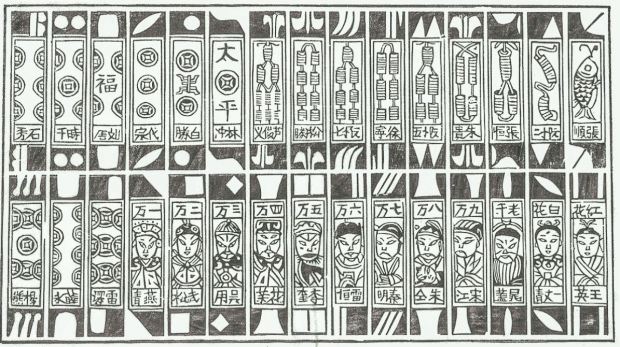 with solid evidence how playing cards were transmitted across cultures.

Since the Egyptian Mamluks launched Tarot’s direct ancestor into Europe, this warrants a detailed examination of their culture and their cards.

As the Islamic Empire expanded in the Middle Ages, it beefed up its army with a supply of enslaved, brainwashed boys from Central Asia known as Mamluks. In 1250, this branch of the army took advantage of political turmoil to stage a coup and establish an empire that lasted until 1517, when it was overrun by the Ottoman Turks. The book’s fascinating details introduce us to the history and culture of these exotic descendants of slaves.

A luxurious, gold-accented Mamluk deck from the fifteenth century was discovered in a Turkish museum in the 1930s. Sometime in the past, missing cards from the Istanbul deck were replaced by repurposed cards from two other decks, causing much confusion. Hoshour’s in-depth examination of these replacement cards clarifies the deck structure. If you own Ulrich Kaltenbach’s recreation of the Istanbul deck, this book is necessary reading. The appendix contains Kaltenbach’s entire deck for easy reference.

One of my favorite chapters discusses Mamluk suit symbols and their relationship to Mamluk culture, heraldry and court hierarchy. Since these symbols are the progenitors of Tarot’s Latin suit symbols, we’re put in touch with Tarot’s deep ancestry. If you’ve ever doubted that European playing cards have an Arabic origin, you should be convinced by the juxtaposition of Mamluk and Italian cards, and the borrowed Arabic words for European cards.

Ben Hoshour belongs to the ranks of tarot historians who use documented facts to illuminate a deck of cards that’s been mired in delusion and fantasy ever since de Gebelin experienced his Egyptian epiphany at a Parisian gaming table in the 18th century.

This very readable book is meticulously researched. The illustrations of historic games and fragments of little-known decks are a delight. Numerous maps, graphs and timelines put everything in context. I’m very grateful to the author for compiling so much rich history in one place.

The book is available on Amazon and other book retailers.

Ebooks are coming this summer.