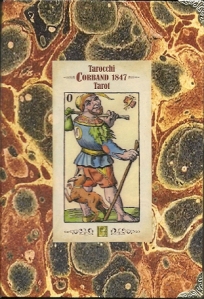 Some of the most beautiful Tarot decks I’ve ever seen emerged from nineteenth-century Piedmont. Giordano Berti has been producing limited editions of these precious but forgotten decks for several years. His most recent deck in the series is the Corband Tarocchi based on Carlo Della Rocca’s soprafino tarot. Della Rocca died in 1835, but enjoyed an afterlife later in the century when piemontese printers like Corband and the Avondo Brothers produced knock-offs of his beautifully engraved deck.

Corband’s cards are shorter and wider than the original Della Rocca engravings, so the figures appear somewhat squat, especially the Star, Empress and Fool. The engraving is simplified, with less shading than Della Rocca’s original. The Fool’s butterfly is a nice Piemontese touch. The colors are based on a water-colored deck in a private collection.

The facial expressions are priceless: Il Bagatto is anxiously wondering if he really needs that drink. The Pope seems angry and judgmental, and the Sun can’t believe what he’s seeing. Death is actually the de-clutter card. The loveliest card is the delicately colored Moon (shown below).

The booklet gives background on the uncut sheets this deck is based on, a detailed history, and the genealogy of the Corband family researched by Philippe Noyes

The 22-card deck is housed in a gold bag held in a sturdy handmade box covered with marbled paper. The little pamphlet on card reading is a bonus. A tarot medallion etched with esoteric symbols surrounded by an ouroboros accompanies the deck. The card stock is sturdy, smooth and pleasant to handle.

If you collect soprafino decks, this will be a unique addition to your collection.

Here is a link to the deck on Berti’s website that gives a link to his Etsy shop: https://rinascimentoitalianartenglish.wordpress.com/corband-tarot-1847/

Here is background information on Della Rocca and the soprafino style: The Soprafino Deck of Carlo Dellarocca